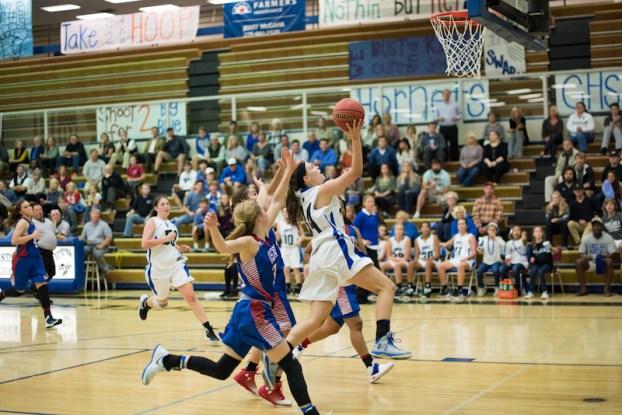 Chelsea sophomore Michaella Edwards is averaging 27.6 points and 11.5 rebounds per game through eight games this year for the revamped Lady Hornets. (File)

CHELSEA – The Chelsea Lady Hornets finished the 2015-16 basketball season with a 6-20 record. This year, Chelsea matched that win total in just seven games, racing out to 6-1, and the Lady Hornets stood at 6-2 as of Dec. 7, with wins over both Briarwood Christian and Vestavia Hills under their belt already. Chelsea is averaging nearly 60 points per game through eight games and is giving up just 51, and has to this point in the basketball season been the biggest pleasant surprise across the county.

There are a number of factors that have led to this renaissance for the Chelsea girls basketball program, including an injection of new blood at the head coaching position, as Lori Weber has taken over as Chelsea’s head coach and Lauren Swee has come on as an assistant. While Weber and Swee have obviously had success flipping the program on its’ head in a short period of time, the player who has had the most to do with Chelsea’s success has been sophomore Michaella Edwards.

Edwards is averaging 27.6 points and 11.5 rebounds per game through eight games this year to go along with nearly three steals and 1.5 assists. No other player on Chelsea’s team is averaging double figures in scoring. Edwards has established herself as one of the premier scorers in the county, and Swee said there is still ample room for the sophomore to improve.

“She’s definitely a standout and a leader for our team,” Swee, who played basketball and graduated from Chelsea in 2011, said in a Dec. 6 interview. “We have leaders in several different aspects, and Michaella leads our team on the court. She’s a very strong offensive player. I think there’s still a lot of (room for) growth. I think she definitely has the potential to go as far as she wants to go.”

While Edwards has posted strong numbers to date this season, she is not necessarily having a breakout year, as she averaged 18.3 points and 10.1 boards per game as a freshman en route to earning a Second Team All-County selection a year ago. Even at her young age, Edwards can easily pinpoint the differences between the team mentality from a year ago to now.

“Last year no one really cared if we won or not,” she said simply. “This year everyone loves playing and they want to win and want to succeed and become a better team.”

This is also a young team, with only one senior and a host of underclassmen seeing minutes this year. On such a young team, Edwards views herself in the same light as the coaches do, one of the team’s vital leaders.

“I like to view myself as a leader, I want to be able to lead my team because we’re so young,” she said. “But there are so many leaders on this team.”

With such a young core and new life being breathed into the program, the Lady Hornets have a chance to be one of the most improved teams across the state this season.

Chelsea’s next game is on Dec. 9 at Shelby County.

By BAKER ELLIS | Staff Writer CHELSEA – Now that the 2016 football season has drawn to a close, it’s... read more