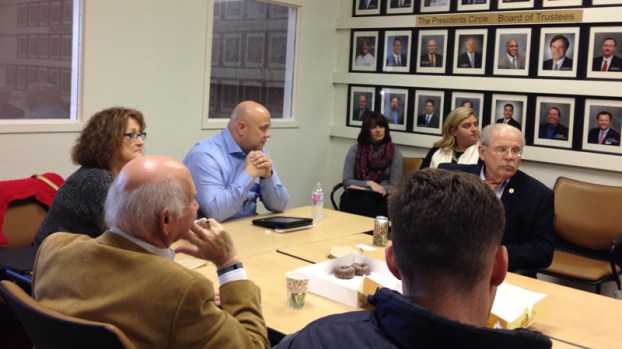 HOOVER – Preparedness was the focus of a meeting of the Hoover Area Chamber of Commerce Economic Development Committee on Dec. 1.

Jeff McDowell of McDowell Security was the guest speaker at the committee’s meeting.

McDowell said he started his company about six years ago after beginning his career as a dispatcher for the Kimberly Police Department and also working with military police and a security director for the Riverchase Galleria.

McDowell said he decided on a topic for his presentation after seeing news coverage of the fires in Tennessee.

“That right there ought to get everybody in here’s attention,” McDowell said of the need for businesses to have emergency plans.

McDowell said there was a time when his own business faced a crisis, with McDowell being hospitalized, and did not have anyone capable of processing payroll.

“I had preached these things, and we didn’t have a plan in place,” he said.

About 60 percent of businesses experience some type of “catastrophic” event but 90 percent had no emergency plan, McDowell said.

Many businesses that experience a crisis never re-open, and most of the ones that do stay afloat never fully recover, McDowell said.

Business owners and managers also usually do not consider that crises can strike not only their own operation but others they do business with.

“We’re hanging by a thread,” he said. “You have to consider what to do if something happens with your supplier or someone you rely on. You need to make sure your clients have these plans in place.

McDowell said his company often receives calls after something bad has happened.

“The worst time to try to make a plan is in the middle of a crisis,” he said. “A lot of times it’s something that could have been prevented.

“Nobody thinks it will happen to them. Monday morning, the people up in Gatlinburg woke up and none of them thought they would be running for their lives Monday night.”

By EMILY REED / Special to the Reporter ALABASTER – Travis and Stephanie Rice of Alabaster have a lot of... read more