NORTH SHELBY – The Montevallo girls’ basketball team traveled to the northern part of Shelby County on Tuesday, Dec. 6, to take on the Lions in an in-county matchup between Class 3A and Class 5A. Although the offense was non-existent for most of the night, the Bulldogs were able to escape with a 33-28 win.

The 33 points marked Montevallo’s (6-1) second lowest point total of the season next to the 29 they put up in a 29-23 win over Bibb County. In both instances the defense ended up being enough for the Lady Bulldogs to hold on for the win.

It didn’t look like things were going to go Montevallo’s way as Briarwood (2-5) led for the majority of the game and held the lead at the end of every quarter except for the fourth.

The Lions’ defense kept up the pressure in the second and held the Bulldogs to just two made baskets (five in the half), while they made five second quarter shots to jump up 19-12 at halftime. 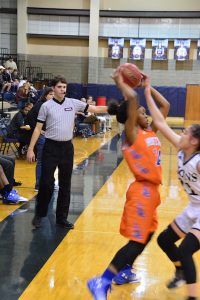 Montevallo made adjustments at the half and turned up the pressure on both ends of the floor in the second half. They were only able to make three baskets in the third quarter, which wasn’t much of an improvement, but two of which were three’s and the way their defense played, they didn’t need any more offensive production. The Lady Bulldogs held to two made baskets and just five points in the quarter and all of a sudden, Montevallo had shifted the momentum in their favor and only trailed 24-20 going to the fourth.

Briarwood came out in the fourth and tried to put the game away early as the made a three on their first possession of the quarter and then one of two free throws on the next possession to start the quarter on a 4-0 run and jump up 28-20. Montevallo had enough at that point and went on an 8-0 run in two minutes of game time and all of a sudden the game was knotted at 28-28 with three minutes left.

The Lions had a couple of good looks, but were unable to find a basket the remainder of the game. The Bulldogs made a jumper and free throws down the stretch to end the game on a 13-0 run behind seven fourth quarter points from Lauryn Lilly, and win by the final of 33-28.

For the night, Briarwood shot 3-8 from the free throw line and those five missed ended up being the difference in the game. Montevallo wasn’t much better from the line as they only made 5-11.

Lilly led the Bulldogs with 11 points on the night and was 0-5 from the free throw line or her night could have been even bigger. Alesha Reed added eight points for Montevallo, including a big three in the fourth quarter. Morgan Hutchinson led Briarwood with eight points, including three of the Lions’ four fourth quarter points.

Montevallo has won five consecutive games and their only loss of the season is to 7A Spain Park.