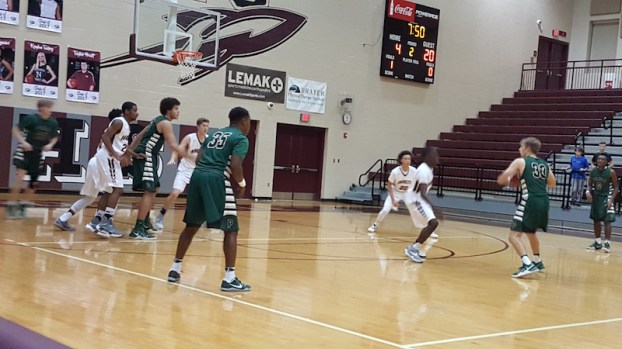 Pelham outscored Gardendale 20-4 in the first quarter of their 63-34 road win on Tuesday, Dec. 6. (Contributed)

Pelham wins 5th in a row

GARDENDALE – The Pelham Panthers continued their winning ways as they almost doubled up Gardendale on Tuesday, Dec. 6, knocking off the Rockets 63-34 on the road. The Panthers have gotten used to a complementary effort from Alabama commit Alex Reese and 2018 point guard Justin Allison and that duo led the Panthers yet again.

Pelham (6-1) scored first in the game when Justin Allison made a 15-footer and a three-point basket in the first 1:15 of the game to give Pelham an early 5-0 lead. In the next two minutes of the first quarter, Reese scored on a dunk, layup and another dunk off an Allison assist, which gave the Panthers a 15-2 lead to start the game. They ended the quarter up 20-4 behind nine first quarter points from Reese and seven from Allison.

“We got off to a hot start tonight and it was great to see us continue that success for the rest of the first half,” Panthers Head coach Joel Floyd said of his team’s first-quarter effort.

Pelham didn’t even consider looking back and kept their feet on the pedal in the second quarter as they went on a 16-7 run behind four different scorers including eight more points from Allison. The Panthers had secured a 36-11 halftime lead behind some lights out shooting and a balanced attack.

Trying to maintain their lead, the Panthers were outscored in the third quarter 13-11, but still had a 47-24 lead after three quarters of action. Yet again four different players scored in the quarter as Saadiah Bennett and Mason Goolsby contributed points.

In the fourth quarter, Pelham got back on a track offensively and outscored the Rockets 16-10. Reese came off the bench at one point and hit back-to-back bombs from behind the arc to put the Panthers up 55-28. After those two shots he decided to go back to what he knows best and show off his athleticism as he flew down the middle of the lane for a monster dunk to extend the lead even further. Pelham closed out the game strong and won by the final of 63-34.

Reese led the Panthers with 21 points and eight rebounds, while Allison proved he can beat you in several ways with his balanced attack of 19 points, four rebounds and three assists. Rottier gave Pelham three double-digit scorers with his 10 points on the night.

“We lost a little focus in the third quarter, but overall is was a quality performance by the entire team. Now we can focus on Friday,” Floyd said.

Pelham (6-1) has now won five games in a row since their early-season loss to 7A Mountain Brook, who is considered to be the best team in Alabama according to USA Today High School Sports. The Panthers rank 12th on the list and are proving they are a contender this year in Class 6A.

Montevallo, Briarwood fight to the end