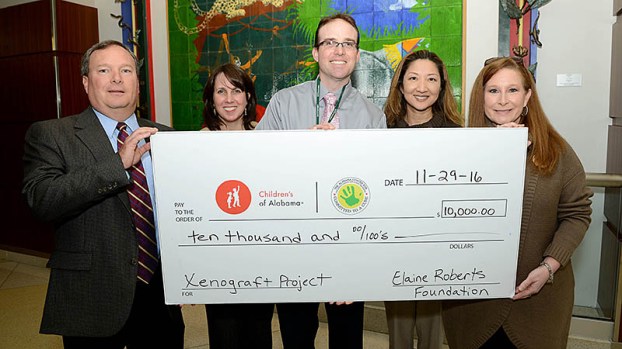 A $10,000 check from the Elaine Roberts Foundation was presented to the Alabama Center for Childhood Cancer and Blood Disorders at Children’s of Alabama for their Xenograft project. (Contributed)

BIRMINGHAM – In November, a $10,000 check from the Elaine Roberts Foundation was presented to the Alabama Center for Childhood Cancer and Blood Disorders at Children’s of Alabama for their Xenograft project.

“It was a great moment for me because this is what the foundation is about,” said Alabaster resident Laura Roberts. “It is all about raising awareness and finding different research projects to help other children.”

Laura Roberts lost her daughter, Elaine, to childhood cancer in February. Elaine, 16, was diagnosed with Alveolar Rhabdomyosarcoma in May 2015.

Roberts said the donation made in memory of Elaine, is the “first fruits” of fundraising efforts spearheaded by the Foundation.

A community garage sale was held at Thompson High School in 2015, and the Foundation donates 100 percent of the collected funds to pediatric cancer research.

The Foundation works to join with doctors and scientists in the search for a cure.

Since 2011, eight children have been treated at Children’s of Alabama for Alveolar Rhabdomyosarcoma, a rare and aggressive cancer.

Currently, three of the eight children have survived.

“We want to make a difference,” Roberts said. “I know firsthand how underfunded childhood cancer research is. I also know how hard cancer is and how devastating it is on families. Being able to donate to Children’s of Alabama where Elaine was treated really means a lot.”

Only four percent of the money allocated for cancer research nationally is directed toward pediatric cancer research, according to a press release from the Elaine Roberts Foundation.

Due to the high cost of drug therapy research, most drugs are only given consideration for the pediatric population after proving successful in adult patients. The result is reduced survival rates for pediatric patients, which includes anyone under the age of 18.

The Alabama Center for Childhood Cancer and Blood Disorders’ partnership of local, national and international centers of excellence provides care and treatment for 1,500 children and adolescents with all types of cancers and blood disorders in the state of Alabama and the region each year. The cure rate for childhood cancers has risen from 50 percent to 84 percent in the last 20 years and strokes in patients with sickle cell disease have decreased 90 percent through standardized screening processes, according to the release.

Roberts said as 2017 approaches, the Foundation is looking at different options for fundraising efforts including a race.

By EMILY REED / Special to the Reporter ALABASTER – While beefing up security at Alabaster’s largest shopping center this... read more