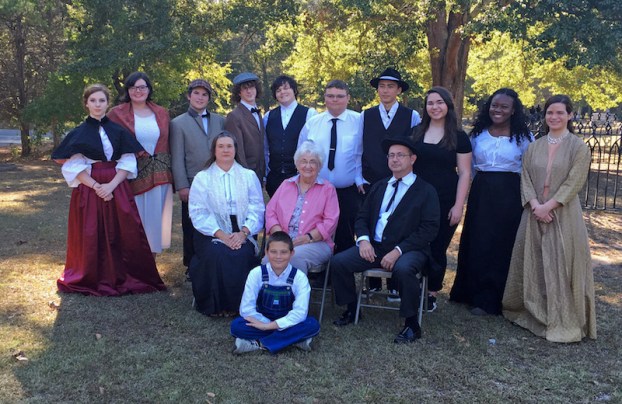 Drama students from Calera High School will join with local actors on Oct. 29 for the Historical Cemetery Walking Tour. The event, which is organized by the Shelby County Museum & Archives, will highlight the lives of some of the people buried at the Columbiana City Cemetery. (Contributed)

Anyone who has recently bumped into Bonnie Atchison in Columbiana may have noticed a difference in the way she speaks. Don’t worry, she will eventually return to her normal voice, but from now until Oct. 29 Atchison will be practicing the distinctive way her late friend Jeannette Niven spoke.

Atchison, along with local actors and students from the Calera High School Drama Department, will be participating in the Historical Cemetery Walking Tour at the Columbiana City Cemetery. During the tour, actors will portray a selection of early residents interred at the cemetery.

The tour is a fundraiser for the Shelby County Museum & Archives. As executive director for the museum, I envision the tour as a way to celebrate the history of Shelby County. Because Columbiana has long been a center of influence as the county seat, many of the county’s most influential people from long ago are buried there.

Participants will enjoy a lantern-lit tour, with a guide that will take them to graves of people interred at the cemetery. Actors will then provide a glimpse into the life of the deceased in a way that will both honor that person and provide a great lesson in history.

Columbiana Mayor Stancil Handley is happy to see an event of this kind in Columbiana.

“This tour is a way to see that we don’t lose this history,” Handley said. “It is all about honoring those that are buried here.”

Within the grounds of the cemetery lie soldiers, judges, masons, Methodists, Baptists and people who moved here from far-away places. They all have a story to tell and a history that should never be lost.

Throughout the years several local groups, including the Boy Scouts of America Troop 560 and the Columbiana Ward of the Church of Latter-Day Saints, have worked to protect and preserve the Columbiana City Cemetery.

Local actors that will appear along with Bonnie Atchison are Bill and Beverly Justice, and their son Denisen Justice. Students from Calera High School will also play a large “role” in the tour, with many of them acting or assisting with the event.

Calera High School drama teacher Alice LaGrone, along with Principal Joel Dixon, found a way to incorporate the tour into the curriculum for the 2016-2017 school year. Since the beginning of the school year, her students have been developing their monologues based on research and information from records contained at the Shelby County Museum & Archives.

Involving students in the process provides a creative way for them to learn about the history of the county they live in. By taking on the role of a character, or helping in some other way, students have ownership in their history.

Ted Urquhart, president of the Alabama Cemetery Preservation Alliance, Inc., recently wrote a letter to Mayor Handley commending the city in its involvement with the cemetery tour.

“There is no better way to involve people in honoring those who came before us than with a well-prepared tour of their final resting places,” Urquhart wrote.  “I further understand that young people from a local high school will be researching the lives of and contributions made by several early residents now interred in the cemetery and will be in costume portraying those individuals during the evening – Outstanding! This will serve to enhance their awareness of important historical moments and events and, hopefully, carry this ‘preserve the past for the future’ theme forward into their adult lives.”

Tickets for the tour can be purchased in advance for $10 at Busy Hands Gallery and at the Shelby County Museum & Archives.  They are also available online at Shelbycountymuseum.eventbrite.com. Children 12 and under are free with a paying adult. The ticket price will increase to $15 at the door, so be sure to buy your ticket ahead of time and save some money.

Due to limited parking at the cemetery, participants will need to park behind the Columbiana Senior Center located at 110 Mildred Street. From there they can ride the trolley to the cemetery. Treats and warm beverages will be provided at the Senior Center.

Queen of Halloween to open home once again

By JENNIFER MAIER / Community Columnist For years she has been known as the “Queen of Halloween,” and with good... read more