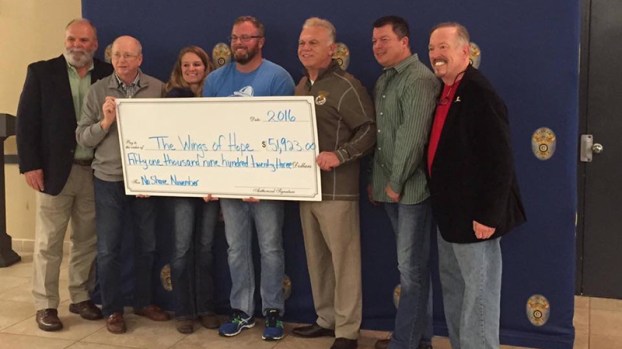 Members of local law enforcement presented a check for $51,923 to the Wings of Hope Pediatric Foundation after successfully raising the funds through a “No Shave November” fundraiser. (Contributed)

For the month of November, police officers were allowed to grow beards in exchange to raise money for the Wings of Hope Pediatric Foundation, which helps give families with a terminally ill child more time to spend together by providing services such as house cleaning, lawn maintenance, meals, financial assistance paying bills and more.

As a result of the annual “No Shave November” fundraiser, the departments and Shelby County businesses and residents as a whole raised a record $51,923 for the foundation.

The $51,923 raised in 2016 was $6,000 more than the departments raised in last year’s fundraiser and the check was presented to the Wings of Hope Foundation on Dec. 6 at the Hoover Met.

Helena Police Chief Pete Folmar was proud of how much Helena could contribute to the fundraiser as well as the other agencies.

“It’s just awesome, especially as small of an agency as we are the business owners and citizens of Helena have really stepped up to raise that much money,” Folmar said. “I think our part was $7,000 and to raise that much in a town as small as we are in a month is huge. Lieutenant Brady Flynn and officer Amanda Davis worked hard putting this whole thing together for us so I just really want to single them out for all their hard work.”

This year, a new addition was added to the fundraiser to help generate even more funds in the form of an online auction.

NORTH SHELBY – Some of Shelby County Schools’ top teachers were recognized Dec. 5 at the Teacher of the... read more