HOOVER – A 23-year-old was arrested Monday and charged with possession of a forged instrument for allegedly passing counterfeit $100 bills at the Walmart off U.S. 280, according to Hoover Police. 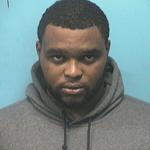 Demaraaron Cordarriucs Johnson of Birmingham is being held at the Shelby County Jail on a $10,000 bond.

Johnson allegedly purchased two Kitchen Aid mixers from Walmart on the morning of Nov. 11, according to a press release from Hoover Police.

The suspect exited the store and left the area in a red Chevrolet Camaro.

Surveillance images of the suspect and the getaway vehicle were posted to Hoover Police Department Facebook page and were sent to Crime Stoppers of Metro Alabama.

Detectives received several tips from the public that helped identify Johnson as the suspect, according to the HPD release.

HPD obtained arrest warrants through the Shelby County District Attorney’s Office on Dec. 1, and Johnson was taken into custody by the U.S. Secret Service on Dec. 5.

Johnson is also suspected in several other forgery cases throughout the Birmingham area, according to the release.

HOOVER – The Hoover City Council rescheduled two of its upcoming meetings because of the holidays. The council’s meeting originally... read more