By MICHAEL J. BROOKS/For the Reporter 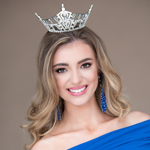 “I’ve loved Alabama for as long as I can remember,” Walker said. “I won the Outstanding Teen competition as part of the Miss Alabama pageant when I was 14. I received full-tuition offers from Alabama, Auburn and Troy, but there was no question where I wanted to be.”

The road to this win was a long one, she said. Walker won the Miss Covered Bridge pageant in Oneonta in 2015 and competed in Miss Alabama for the first time. She placed in the top 12 and won the talent competition.

Walker also competed earlier this year as Miss Hoover and was named first runner-up in Miss Alabama. The state-wide pageant in June 2017 at Samford University will be her third trip to Miss Alabama, and, she hopes, the clincher.

Walker is a musical theatre major at UA, and said she came to this decision while at Oak Mountain.

“I was in two shows in high school,” she said. “The first was ‘Grease-The Musical’ when I was a junior and then ‘Shrek’ when I was a senior. I played Fiona wearing an acrylic nose, green paint and a fat suit! But at that moment on stage I knew what I wanted to do with my life.”

Beyond Miss Alabama, Walker dreams of going to New York to perform.

Walker’s talent presentation for the UA pageant was dance. She performed ballet en pointe to “Piece of the Sky” from Barbra Streisand’s movie, “Yentl.”

Walker had a great teacher. Her mother, Angela, is ballet director at the Birmingham Dance Theatre in Vestavia. Angela Walker and her husband, Mike, live in the Meadowbrook community in Shelby County.