COLUMBIANA – A 28-year-old Alabaster man is being held in the Shelby County Jail without bond after he was arrested on his fourth felony drunken driving charge in three years. 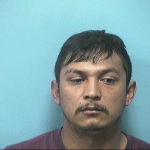 Authorities arrested Juan Michael Gallegos-Silva on Dec. 7 after a Shelby County grand jury issued an indictment for his arrest in 2015.

According to his latest indictment, Gallegos-Silva allegedly drove a vehicle while he was intoxicated on May 7, 2015. When he was pulled over, he allegedly was driving on the wrong side of the road, and allegedly failed to provide proof of insurance and a driver’s license.

When he was arrested on Dec. 7, he was serving a five-year probation sentence for three previous felony drunken driving charges he pleaded guilty to in 2013, according to Shelby County Court documents. Those DUI charges were tied to incidents in Montevallo, and were elevated to felony status because he had three prior misdemeanor DUI counts on his record.

Because his probation was revoked on the previous felony charges, he currently is being held in the Shelby County Jail without bond.

Felony drunken driving charges carry a maximum of 10 years in prison upon conviction. As of Dec. 9, Gallegos-Silva did not have a future court date listed in Circuit Court.

SCSO searching for man who was accidentally released from jail