HOOVER – Hoover Police are investigating a shooting that occurred Dec. 8 near the Hoover Public Safety Center. 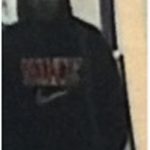 Police released a surveillance image of a person thought to be one of the suspects in a shooting on Dec. 8. (CONTRIBUTED)

Earlier on Dec. 8, the victim and a friend drove to Montgomery, where they picked up two acquaintances with the intent of bringing them back to the Hoover area, according to a Hoover Police Department press release.

After making a stop in Pelham, they continued into Hoover, where one of the acquaintances pulled a handgun and demanded property from the driver and his friend.

The victim pulled onto Southpark Drive, in front of InTown Suites and near the Hoover Public Safety Center, and the armed suspect shot the victim in the leg at about 7:12 p.m., according to the release.

A statewide “be on the lookout” has been issued for the stolen vehicle, which is a black BMW X3 with an Auburn University tag reading “MMFS.”

The suspects are described as black males in their 20s from the Montgomery area.