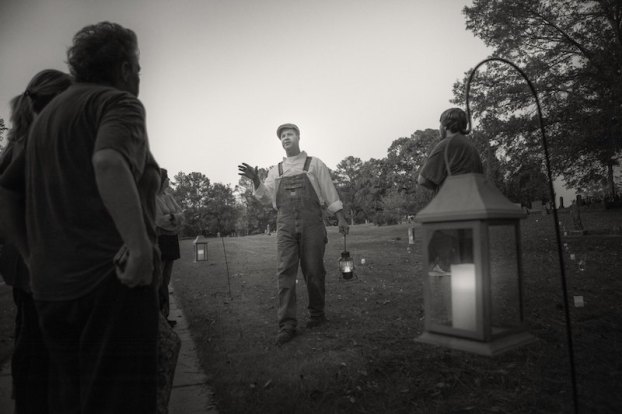 Tim Nettles, a tour guide for the Historical Cemetery Walking Tour, talks with a group prior to starting a tour of the Columbiana City Cemetery. (Contributed/Kevin McKee)

There is a lot to be learned from visiting a cemetery. On Oct. 29, a valuable lesson in history was provided to participants in the Historical Cemetery Walking Tour at Columbiana City Cemetery.

The cemetery tour, which was a fundraiser for the Shelby County Museum and Archives, attracted over 220 visitors.

The evening began with a trolley ride from the Columbiana Senior Center. As groups arrived at their destination, they were greeted by tour guides who provided background on the history of the cemetery, then led each group along a path that featured nine graves highlighted on this year’s tour.

Actors at each grave interpreted the story of the deceased, and brought to life history that might otherwise be forgotten.

Among those featured on the tour were Napoleon Bonaparte Mardis, who was a prominent citizen of Columbiana. Mardis, who died in 1892 at the age of 69, was one of the early petitioners to incorporate Columbiana. He served as county treasurer from 1846 to 1861.  Mardis served as a probate judge for the county and was delegate to the 1865 state constitutional convention.

The role of Mardis was played by local attorney Bill Justice. The Justice family has a deep connection with the cemetery.

In 2005, two of Justice’s sons, Robert and Andrew, mapped the graves of the cemetery as part of their Eagle Scout project. It is through their efforts, and the efforts of other groups such as the Columbiana Ward of the Church of Latter-Day Saints, that much of the history contained within the cemetery has been so carefully preserved.

Justice was just one of the local actors participating in the event. His wife Beverly and their son Denisen also spent months preparing for their roles as Missouria Cromwell Huyett and J.W. Johnston, respectively.

Bonnie Atchison, well know in the Columbiana community for her love of acting, took part by portraying Jeanette Niven, who was a friend of hers for many years.

Students at Calera High School, under the direction of drama teacher Alice LaGrone, took on seven of the roles.

Since the beginning of the school year, these students worked hard to develop their characters.  For many of the students, the cemetery tour allowed them the opportunity to act in an outside environment, as well as a chance to interact with their audience.

“I’m so proud to be a part of something so great for Columbiana,” LaGrone said of her experience.

The Columbiana City Cemetery is a source of pride for local residents, and the city of Columbiana works hard to maintain and care for the cemetery’s 11 1/2 acres.

For people who grew up in and around Columbiana, many of the names of the people featured on the tour were names they had heard before, but the history behind the names may not have been so easy to recollect due to the passage of time.

The cemetery tour, although the first of its kind in Columbiana, was modeled after other tours that take place nationwide.

Slowing down for just a little while to learn about a community’s history offers a glimpse into a world that might otherwise be lost to time. For over 200 people, time slowed down at the Columbiana City Cemetery on Oct. 29, and people walked away with a greater appreciation of the sacrifices and accomplishments of those that built Shelby County.

By JENNIFER MAIER / Community Columnist The Columbiana Boy Scouts, Girl Scouts and Cub Scouts are about to kick off... read more