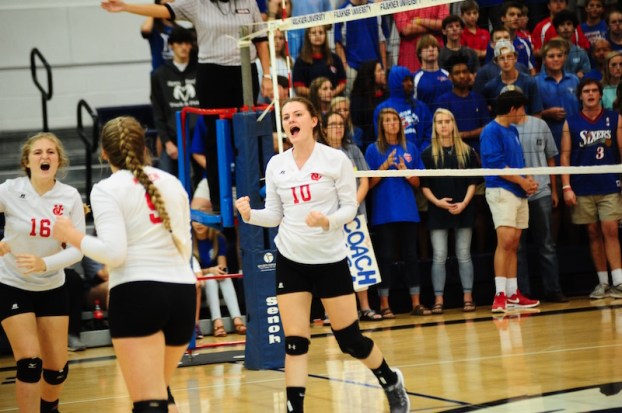 Kalei Merrifield from Coosa Valley Academy led the Lady Rebels to a perfect, 26-0 record this season, which ended with the school’s first state title. (File)

The 2016 volleyball season ended with two county teams making an appearance in their respective classifications’ Elite Eight as well as one team winning an AISA state championship. With the end of the season means it’s time for the All-County selections, so without further ado let’s take a look at who made the cut.

Outside Hitter: Madison Rayam, senior, Thompson. Rayam was the de facto leader of the Lady Warriors team this season and finished the year with 302 kills. Athletic force for Thompson for the last few seasons.

Outside Hitter: Marlee Johnson, junior, Spain Park. The strong-hitting junior from Spain Park finished the season with 385 kills and 312 digs to go along with 87 aces, 37 assists and 67 blocks. An all-around solid season which sets her up well for an impressive senior year.

Middle Hitter: Kalei Merrifield, senior, Coosa Valley Academy. Merrifield finished her senior season with 497 kills, 108 digs, 61 blocks, 58 aces and 23 assists. Her 497 kills were the most in the county, and she led Coosa Valley to an undefeated, 26-0 finish as the Lady Rebels won their first AA AISA state title. Merrifield is committed to play her college volleyball at Martin Methodist College in Tennessee.

Middle Blocker: Samantha Sheets, senior, Helena. Sheets helped lead the Lady Huskies in their first year as a 6A program with 237 kills and 93 blocks. Helena made an appearance in the 6A quarterfinals.

Middle Hitter: Lexie Riggins, senior, Chelsea. Riggins had 311 kills to go along with 339 digs, 49 aces, 37 assists and 97 blocks on the year. Well-rounded senior season for one of the leaders on a Chelsea team that won 39 games.

Outside Hitter: Torie Denkers, junior, Oak Mountain. Denkers helped lead the Lady Eagles to the 7A Elite Eight this season behind her 351 kills, 49 digs and 43 blocks.

Libero: Anna Donohue, junior, Briarwood. Donohue was a key member of the Briarwood team that made an appearance in the 5A Elite Eight. Her 594 digs were tops in the county and she finished with 56 aces as well.

Setter: Ellie Norton, senior, Spain Park. Norton finished her final prep season with 834 assists, the most in the county, to go along with 141 digs, 53 kills, 21 aces and 38 blocks. An incredibly solid player for a good Lady Jaguar team.

Setter: Georgia Stonicher, sophomore, Pelham. Stonicher finished her sophomore season with 857 assists, the second-most across the county, as well as 128 blocks, 58 aces and 25 kills.

Outside Hitter: Sha’Kevia Hogan, sophomore, Spain Park. In her sophomore season Hogan finished with 333 kills, 181 digs, 45 aces and 41 blocks for the Lady Jaguars.

Middle Hitter: Karlee Moss, senior, Spain Park. Moss finished with 282 kills to go along with 265 digs and 141 blocks as well as 25 aces. Was one of only three players to top 100 in three statistical categories.

Middle Hitter: Jules Hamer, sophomore, Chelsea. Finished the season with 293 kills, 110 digs, 102 aces, 108 blocks and five assists. Was the only player in the county to finish with more than 100 statistical points in four categories.

Middle Hitter: Grace Patterson, junior, Briarwood. Patterson finished with 249 kills, 82 blocks and 29 digs to help lead the Lady Lions back to the 5A Elite Eight.

Outside Hitter: Hallie Smith, junior, Helena. Smith finished with 226 kills to go along with 469 digs to help lead the Lady Huskies to the 6A Sweet Sixteen.

Outside Hitter: Jacoby Sims, senior, Oak Mountain. Sims finished her final year with 305 kills along with 36 blocks and 41 digs. Helped lead Oak Mountain to the 7A Elite Eight after thrilling, five-set win over Bob Jones in Super Regional.

Setter: Sam Slaughter, senior, Shelby County. Served more than 350 times and had a serve percentage of 98.4 percent. Was the MVP of the Sipsey Valley Tournament and led the Lady Wildcats all season.

Setter: Madison Rhodes, junior, Helena. Rhodes finished her junior year with 915 assists, the most in the county, along with 45 aces to help lead the Lady Huskies to an upset win over Chelsea in the 6A Area 8 title.

By ALEC ETHEREDGE | Sports Editor ALABASTER – The Thompson girls’ basketball team has had an up and down basketball... read more