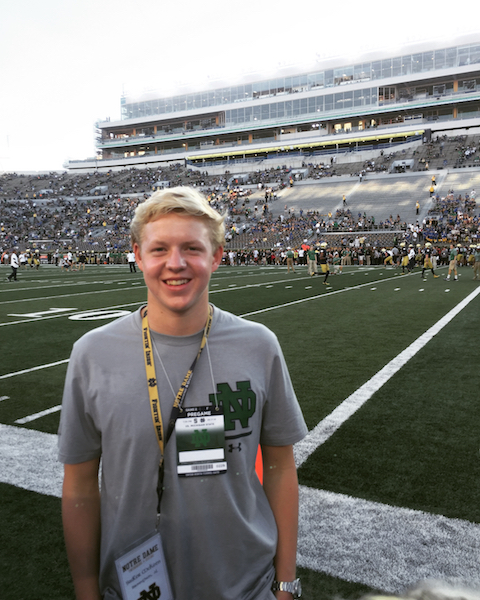 Briarwood Christian Sadler McKeen is set to attend the University of Notre Dame in the fall on a swimming scholarship. (Contributed)

NORTH SHELBY – For as long as he can remember, Sadler McKeen’s life has revolved around water. The Briarwood senior and University of Notre Dame commit joined his first swim team when he was five and began swimming year-round when he was just six years old. For McKeen, swimming has become a way of life that will now give him an opportunity to attend one of the top universities in the country.

“I’ve been in the pool a very long time,” McKeen said with a laugh in a Dec. 7 interview.

McKeen has grown up in the Birmingham area and has attended Briarwood since he was in the fourth grade. Engaging, kind and incredibly polite, the towheaded senior sports a 4.6 weighted GPA, and holds an AHSAA state record in the 500-yard freestyle. In the state of Alabama, swimming is primarily a club exercise (McKeen swims with the Life Time Fitness club team out of Vestavia Hills), with the school season taking a background role, and as a result the sport does not receive much media attention. Nonetheless, McKeen is one of only a handful of athletes in the county with a Division I scholarship offer, and is one of the best around at what he does. 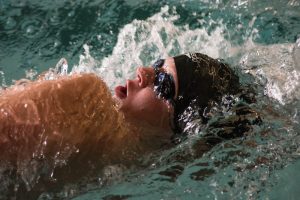 McKeen is one of the top prep swimmers in the state, and sports a 4.6 weighted GPA as well. (Contributed)

Primarily a freestyle swimmer, McKeen can moonlight in the backstroke or butterfly if need be, and is open to filling any role he needs to in college, although he has been told he will likely fit into the 200 and 500-meter freestyle races as well as possibly the mile. While they don’t swim the mile race in high school swimming, McKeen is no stranger to the event at the club level.

“I’ve swam that a bunch of times, too many times,” he said, again with a laugh. “The 500-free is my favorite. It’s in between the long distance and the sprint, it’s all about pacing and planning.”

McKeen has been swimming year-round now for going on 12 years. That’s an incredibly long time for someone who hasn’t graduated high school to commit to one task. Often, athletes who are that dedicated to a singular sport in their youth burn out or lose interest as they move through high school, but that hasn’t been the case with McKeen, who cites great experiences both with the coaching he has received and the friendships he has been able to maintain.

The fact McKeen has been swimming so much since his youth is fortunate, as it was discovered when he was in the seventh grade during a cross-country stint that he has what is called a tarsal coalition. A condition in which two of his ankle bones are fused together, making them easy to break with much added tension.

“They told me at that time the only two sports I could really do were swimming and biking,” he said. “Maybe rowing too, but there’s not much rowing around here. And I enjoyed swimming, so it worked out perfectly.”

Since then, McKeen hasn’t looked back. Now with his high school career wrapped up, he will continue to swim for his Life Time Fitness club team before heading up north in the fall. With a 4.6 GPA, McKeen is considering taking an engineering route at Notre Dame, but is also open to a career in business.

Whatever the future holds for McKeen, both in the water and out of it, there is no doubt he will continue to use his gifts to the best of his ability.