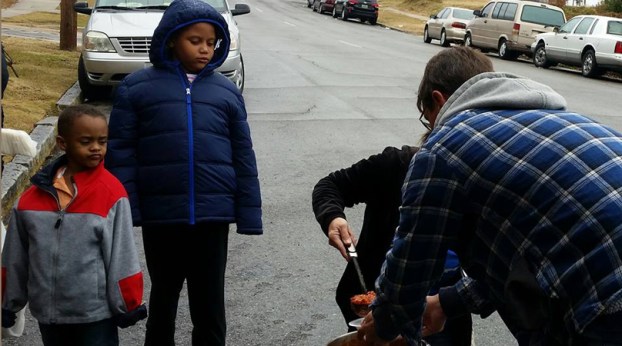 Volunteers from Chelsea Creek Community Church and other nearby churches will provide and serve food to homeless people at Linn Park in Birmingham. (Contributed/His Hands of Grace Ministry)

Chelsea Creek Community Church is one of several churches in the Birmingham area that will be participating in the Feed the Homeless Christmas Dinner on Saturday, Dec. 17 at 11 a.m. Linn Park in Birmingham.

Chelsea Creek Community Church Team Missions Leader Gail Rule said Michelle Franks, founder of of the His Hands of Grace Ministry in Wilsonville, is organizing the event. Rule said His Hand of Grace has hosted events to feed the homeless in nearby areas on a monthly basis for the past nine months. Chelsea Creek has been involved since July.

“We wanted to be more visible to the community and reach out to others,” Rule said. “In July, we started to make a plan to get out in the community. We ban looking for another ministry, and through friends, we found Michelle’s ministry. We’ve always had God’s help, but this is a new thing.”

Volunteers from Chelsea Creek Community Church are expecting to serve over 250 homeless people at the event. His Hands of Grace is also taking donations of winter clothing, toiletries, blankets and toys.

During the Feed the Homeless Christmas Dinner, Chelsea Creek will contribute pumpkin pie as part of the meal.

Rule said the event will be eye-opening for many people who volunteer.

“Most people don’t realize that there are so many homeless people living in Birmingham. A lot of these people are just like everybody else,” Rule said. “One person can make a difference in a person’s life. It’s not comfortable to see what’s actually going on in the community.”

Rule said she hopes that her church will continue to serve the homeless in the future.

“We hope to keep doing this throughout the year. This is something new, and our hope to continue this throughout 2017,” Rule said. “God is touching this ministry in a powerful way. For the past nine months, this has gone from a small group to hundreds of people providing food. God’s hands are really in this.

Rule also said God is working through all of the volunteers.

“We give Him all the glory. It’s not us. We’re just his hands and feet,” Rule said. “Christ uses people, individually, in a different way. We show up, but He is the one who moves people’s hearts.”