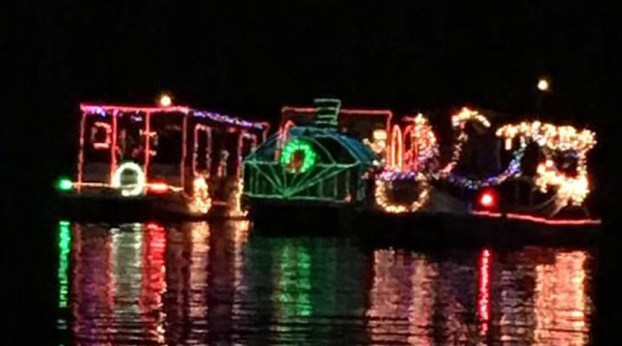 According to Lay Lake Homeowners and Boat Owners Association (HOBO) Chairman Joe Sullivan, the Lay Lake Christmas Parade became a holiday tradition about 20 years ago, when a man named Jimmy Warren decorated his personal boat for the holidays and drove it around Lay Lake for everyone to see.

“This is really a grassroots type of event,” Sullivan said. “This is strictly a tradition that we do for the lake.”

HOBO began recruiting local boat owners for the parade in September. The boats in the parade are usually pontoon boats, and the participants are all volunteers.

Sullivan said this year’s parade was one of the largest he has seen. A total of 24 boats floated in the parade, and the entire procession spanned about one mile.

“My personal goal is to get 30 [participating boats],” Sullivan said. “We’ve never quite gotten there, but we will.”

According to Sullivan, the parade was led by the Alabama Law Enforcement Agency Marine Police Division. All of the boats were decorated with Christmas lights. One boat was decorated to resemble a train, and two boats featured live Santa Clauses. Mayor Stancil Handley floated in the parade.

An estimated 3,000 to 4,000 people watched this year’s parade. Those who didn’t view the parade from the waterfront watched it from the five marinas. Sullivan said the Lay Lake Boating Parade has become a popular tradition for those who live near the lake, and is a rewarding experience for all.

“It has gotten to the point where people who live along the lake will plan their Christmas parties around when we host the parade,” Sullivan said. “Hearing the children screaming and hollering is why we do it.”

The boating parade was hosted by the Lay Lake Homeowners and Boat Owners Association.