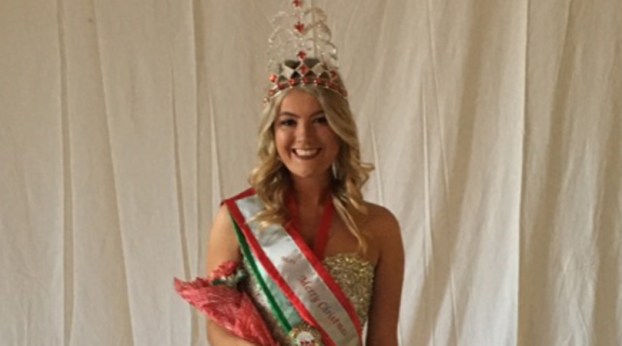 CHHS senior Madison Smith won the title of 2016 Miss Merry Christmas on Dec. 10 at CHMS. This is the first year that the pageant was held at CHMS. (Contributed)

The Chelsea Middle School volleyball team hosted the 2016 Miss Merry Christmas Pageant on Saturday, Dec. 10, at 2 p.m. in the CHMS cafeteria. All girls from birth to the 12th grade were invited to participate.

“Pageants are important because they teach girls a lot about self-esteem and self respect. They’re fun, because you get to dress up and you get to polish your nails and fix your hair. Some of them get to wear makeup, depending on how old they are,” CHHS Volleyball Coach and Miss Merry Christmas Pageant Organizer Michelle Nivens said.

Nivens said the pageant was a festive occasion. The CHMS cafeteria was decorated for the holidays, and contestants discussed their favorite parts of Christmas while onstage.

“The girls [also] get to spend time together while they’re waiting to go onstage, and several of the girls were talking about what they’re asking for during Christmas,” Nivens said.

Contestants were also given the opportunity to wear semi-formal Christmas themed dresses in lieu of traditional pageant dresses.

There was one winner in each division:

Winners will have the option to ride on a float in the Chelsea Christmas Parade on Dec. 17.

“It was so exciting to win this pageant. This was my senior year, so it kind of felt like my last chance. I am so grateful to everyone who helped put the pageant together,” Smith said.

Smith said she appreciated the way the pageant fostered a sense of community during the holidays.

“It brought the community together, and it really brings the spirit of Christmas. There were girls wearing green, red and while, and it was a great way to kick off the holiday season,” Smith said

“There was no Christmas pageant last year. This year, we wanted to see that there was a pageant. We stepped up and hosted it,” Nivens said.

NORTH SHELBY – Every year since 1993, Oak Mountain Middle School has made an overwhelming contribution to the U.S. Marine... read more