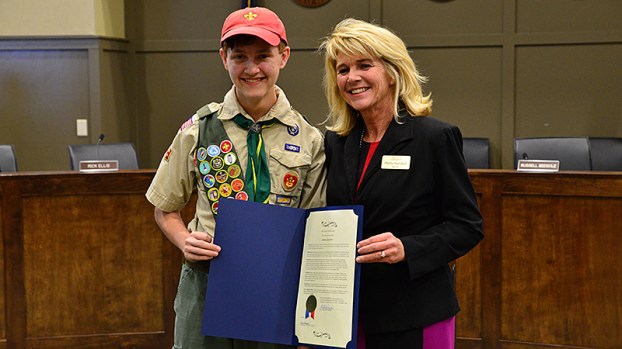 Through is Eagle Scout project, Lawler worked with Family Connection, an Alabaster-based nonprofit organization aimed at providing a safe haven for at-risk youth, to raise money and deliver speeches to area groups to make teens more aware of the local resources available to them.

Lawler, a member of the Helena-based Boy Scout Troop 532, also worked with the Community Baptist Church in Maylene to paint a trailer designated a “safe place” for youth to find love and support.

Through his actions in the community, Lawler not only attained his Eagle Scout badge, he earned praise from the leaders of his home city.

“I recognize Eagle Scout Brent Lawler as worthy of this highest honor and encourage him to continue his commitment to excellence,” Alabaster Mayor Marty Handlon said while presenting Lawler with a proclamation in his honor during a Dec. 12 City Council meeting. “The Eagle Scout Award is a distinction which will follow Brent throughout his life, and will be a beacon to others of the leadership quality and commitment this young man has shown.”

Lawler is no stranger to serving in the community, as he has earned 36 merit badges and has served in the Boy Scout roles of troop guide, chaplain’s aide, patrol leader and as a member of the National Honor Society of the Boy Scouts of America – The Order of the Arrow.

He has also served as a percussionist in the Thompson High School Marching Southern Sounds and in the school’s symphonic band.

After learning of Lawler’s achievements, Handlon invited him to be honored during the City Council meeting, and to lead the meeting’s Pledge of Allegiance.

“Thank you for what you have done, and thank you to mom and dad as well for being so involved in your son’s life,” said Ward 5 Councilman Russell Bedsole. “There’s no doubt Brent is headed for success from here.”

By NEAL WAGNER / Managing Editor ALABASTER – Meadow View Elementary School’s choir got their parents and classmates into the... read more