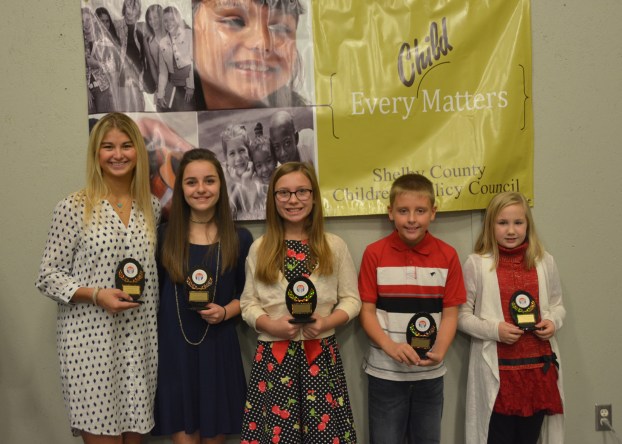 ALABASTER – Five Shelby County Schools students in the Columbiana and Wilsonville areas were honored Wednesday, Dec. 14, during the Character in Action awards ceremony for demonstrating what it means to have good character.

Every year, each Shelby County school district selects one student from each of its schools to receive a Character in Action Award presented by the Shelby County Drug Free Coalition at Family Connection in Alabaster.

Award recipients were handpicked by teachers for displaying good character traits such as respect and kindness toward others, self-discipline and courage, among other qualities. Parents were also recognized for instilling strength of character in their children.

Teachers submitted nominations about each student explaining why he/she was deserving of the award. On Merrell’s nomination form, she was described as being well-liked by teachers and students and having a caring and nonjudgmental spirit.

Merrell was commended for having a good moral compass and a strong understanding of right and wrong.

Gowers’ nominations form described her as someone who is kind and friendly to everyone and who responds well and listens to instructions given to her. Teachers commended Gowers for being the type of person who is willing to help with tasks and willing to help other students without complaint.

“She’s a courageous leader who paves the path instead of following the crowd,” her nomination form read.

Veazey was described as a student who maintains her integrity at all times and who is always willing to help teachers and students without complaint.

Veazey has encountered some tough times in her life, but her teachers said she is a “great example of not letting circumstances dictate the kind of person you’ll be.”

The 2016-17 school year is Veazey’s first year at Wilsonville Elementary, but her teacher said it seems like she has been a part of the Wilsonville family since kindergarten.

Shaler is “the kind of student who goes the extra mile to help other students who are struggling in class,” read his nomination form. “He never makes anyone feel bad when helping or correcting them.”

Shaler is respected by his classmates. His class chose him to be the referee when disagreements break out during kickball because they trust him to be fair and honest.

“He is often the mediator among his peers and he encourages them to do the right thing even when no one is looking,” according to his nomination form.

Crow is regarded by her teachers as being the most trustworthy, respectful and fair student who is always considerate and sensitive to the feelings of others.

Crow, who was selected as her class’ Good Citizen for November, is like a mother hen to her classmates, her teacher said. If someone forgets their lunch box she volunteers to return it to them; if someone in front of her steps out of line to tie their shoe, she lets them get their spot back; and if someone needs to go the nurse, she volunteers to walk with them.

“She’s mature and a pleasant student to be around,” her nomination form read. “She’s a good example of a person who begins with the end in mind.”

FROM STAFF REPORTS The Shelby County Schools technology program recently got a $362,500 boost from the state legislature. The funds... read more