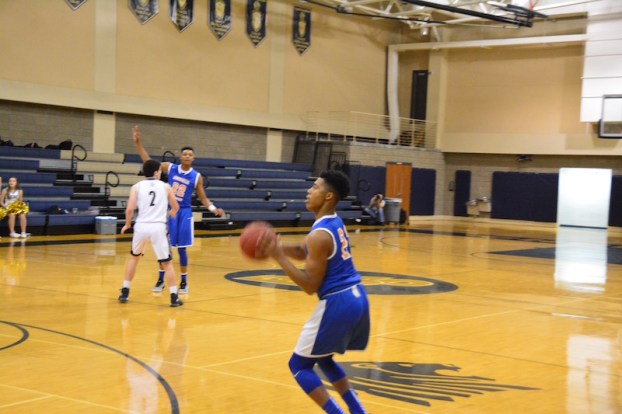 Montevallo's Tre'Shawn Brown had a double-double in the game with 10 points and 10 rebounds to help lead the Bulldogs to an easy win. (Reporter photo/Alec Etheredge)

BIRMINGHAM – Montevallo traveled to Samford University on Tuesday, Dec. 13, to take on the Westminster at Oak Mountain Knights in an out-of-area county matchup.

Montevallo has been one of the best teams in Shelby County so far this year having won five in a row after an early season loss to Jeff Davis in their second game of the Sneaky Pete’s Rebel Classic. They were upset by Calera, who is on fire right now, on Dec. 9 to snap the winning streak.

The Bulldogs (7-2) got back to their winning ways by taking down the Knights easily by a final of 68-35. Montevallo is used to scoring a lot of points as they’ve scored more than 50 in all but one game, but in this particular game they used the defensive side of the ball to run away with it.

In the first quarter they were able to get out to a fast start with a 16-7 run over Westminster, a trend that continued into the second as Montevallo scored one more point, but held steady with only giving up seven to the Knights.

Montevallo’s defense had messed around and held Westminster to just 14 points as they outscored the Knights 33-14 in the first 16 minutes of the game.

Nothing changed in the fourth quarter as the Bulldogs held Westminster just four points in the quarter and ended the game on a 12-4 run.

Da’Shaunte Smith led the Bulldogs yet again with 18 points in the game, whild adding eight rebounds and five assists, but senior Tre’Shawn Brown might have stolen the show with his double-double performance of 10 points and 10 rebounds. Sam Banks also chipped in nine additional points for Montevallo. Wiley Boone led Westminster with 13 points in the game.