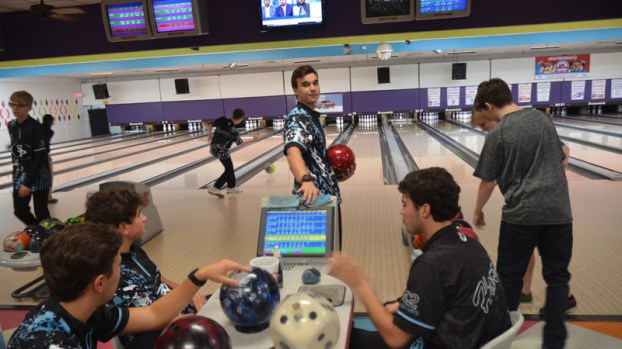 HOOVER – Spain Park High School’s boys bowling team last year became the state’s first true champion in the sport, and the Jaguars have a strong chance to defend their title this year.

SPHS is off to a 14-1 start after a win over Pelham on Dec. 7 that was highlighted by Tucker Contorno’s team-high 239 score.

The lone loss was to nemesis Vestavia Hills High School by 35 pins.

Spain Park coach Stephen Hobbs said the Jaguars have lost twice in three years of competition, with both coming to Vestavia.

SPHS rebounded from a loss last year to win the state championship.

The first year of bowling in Alabama, in 2014, was a provisional year as players, coaches and officials familiarized themselves with the new sport.

There are no classifications in bowling as there are in most other sports, so the last team standing at the end of the year is truly the state champion.

The SPHS team includes 12 bowlers, seven of which are considered the varsity team, which has a maximum of eight bowlers.

Junior Matt Plexico is the only varsity newcomer.

The two seniors on the team are Andrew Harris and Ryan Caraway, both of which average scores in the 190s along with Contorno and Jalen Johnson.

Caraway bowled a career high 264, with 10 strikes, on Dec. 6 in a tri-match with Hoover and Parker.

Hobbs, who has coached the Spain Park team since its beginning, said he has seen the number of teams competing in the sport increase.

“I like it because it’s a lifetime sport,” Hobbs said. “You can play it your whole life. And it’s getting kids involved that wouldn’t be involved in a traditional sport.”

The team practices and hosts competitions at Vestavia Bowl, which Hobbs said has been a strong supporter of the program and junior bowling in general.

By ALEC ETHEREDGE | Sports Editor NORTHPORT – The Chelsea Lady Hornets got out to a hot start this year,... read more