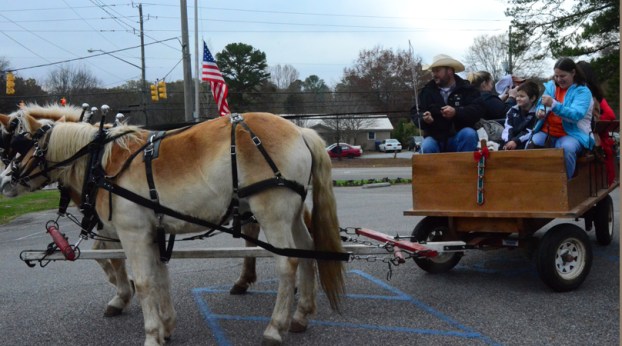 Kids who attended the party had the opportunity to ride a horse-drawn “Christmas wagon” for a few blocks around town. (Reporter Photo/Amalia Kortright)

The Albert L. Scott Library held its annual Holiday Party from 10 a.m. to 11:30 a.m. on Wednesday, Dec. 14. According to Youth Services Librarian Frances Smith, the event was mainly for young children and their families.

“It gives a lot of families to get involved with seasonal festivities. If they’re busy, then this is a good time for them, and they can do three festive things at once,” Smith said.

Library Director Nan Abbott said the event was very convenient for local families because it is close to home. She also said the event offered several unique activities.

“The children can see Santa in Alabaster without going to the big malls, and it’s just a good, fun, festive community event,” Abbott said. “It gets people into the spirit of Christmas. We have the wagon ride, and a lot of [other] kids don’t get to do that.”

Kids who attended were able to get their pictures taken with Santa and Mrs. Claus. The library also set up a station where kids could decorate their own gingerbread man. Abbott said the cookies, candy and icing were donated by a local grocery store.

“They get to be creative, and they get to do it on their own. They can eat it here, or they can take it home,” Abbott said.

At the front of the building, kids and their parents lined up to ride on a horse-drawn “Christmas wagon” for about two blocks.

Smith said the Albert L. Scott Library has hosted a holiday party annually for decades, and it has become an event that many kids and their families look forward to.

“It is a nice, free event. It’s family friendly, and it’s in Alabaster,” Smith said. “I know that, because it’s been going on for such a long time, it’s become a family tradition for some.”

Alabaster resident Leah Earnest said the event was also a good way to help newcomers get involved in the community.

“We just moved here recently, and [my daughter] likes to come to the library. She wanted to ride the carriage,” Earnest said. “The library is really good about putting stuff on, so we try to come whenever they do. I think her favorite thing was decorating the cookie.”

By NEAL WAGNER / Managing Editor ALABASTER – Santa Claus will take a break from his last-minute preparations at the... read more