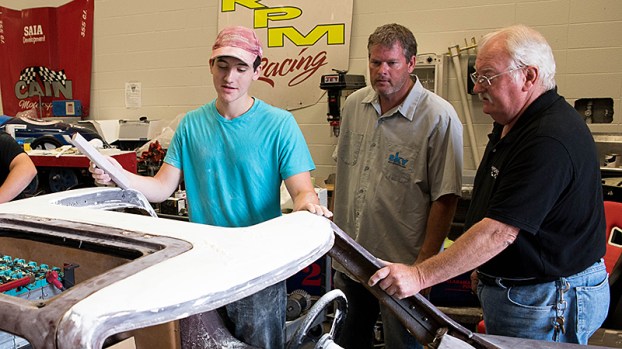 Thompson High School engineering teacher Brian Copes, second from right, was recently named one of the top 50 teachers in the world. (File)

Copes named among top 50 teachers in the world

ALABASTER – Thompson High School engineering teacher Brian Copes’ efforts to connect students in Shelby County with their counterparts in Central America have had a wide-reaching effect – And a global teacher award foundation has taken notice.

The Varkey Foundation, which presents the Global Teacher Prize to one teacher in the world each year, recently released its top 50 finalists for the 2017 award. Of the 50 finalists, Copes was one of only five teachers from the United States, joining colleagues from New York, North Carolina and California.

The winner of the Global Teacher Prize receives a $1 million award, and is awarded to a teacher “who has made an outstanding contribution to their profession.” Copes was nominated by former Alabaster City Schools Coordinator of Curriculum and Instruction Cena Davis.

“The prize serves to underline the importance of educators and the fact that, throughout the world, their efforts deserve to be recognized and celebrated,” according to the Varkey Foundation’s website. “It seeks to acknowledge the impacts of the very best teachers – not only on their students but on the communities around them.”

Before he began teaching at Thompson High School in 2015, Copes taught in Chelsea and Calera, and formed a relationship with Jutiapa, Honduras. At Calera High School and now THS, Copes has supervised student programs to better the lives for their counterparts in Honduras through projects such as creating easy-to-assemble basic utility vehicles, prosthetic legs made out of Toyota motor mounts and installing a large water chlorinator during a trip to the town last summer.

“Brian’s distinctive approach is project-based learning, which inculcates important STEM skills while integrating this knowledge with design that helps benefit others in the community. His students have actually designed inexpensive vehicles for assembly using ordinary hand tools in remote world locations,” read his entry on the Varkey Foundation website. “Brian has received the 2015 Presidential Volunteer Service Award, and was named 2014 Environmental Teacher of the Year, along with many other awards over the years. With the prize funds, Brian would seek to establish ‘Sister School’ partnerships with other schools around the world, and develop the products his students design to go into production.”

Copes said he was shocked when he learned he was a finalist for the prestigious award.

“Wow, I am speechless to receive such a distinct honor,” Copes said. “To be considered one of the top 50 teachers in the world. Thank you, Cena Davis for the nomination.”