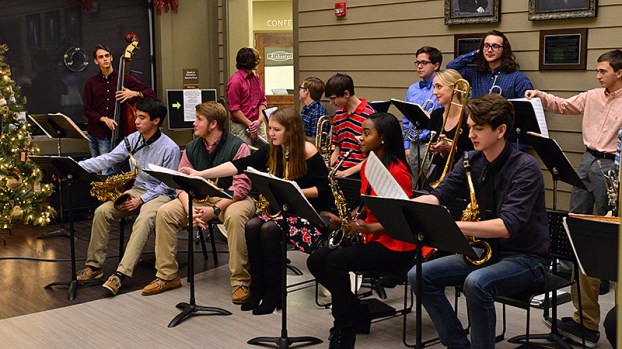 ALABASTER – The Thompson High School Jazz Ensemble was recently selected as one of 12 finalists to compete in a national jazz competition in March 2017.

“It was great news to find out we had been selected as one of the schools to compete,” said Justin White, assistant band director at THS. “Our goal was just to do our best, and knowing that we stood out among schools from across the country was just really exciting.”

Twenty students from the THS Jazz Ensemble will take part in Swing Central Jazz from March 29-31, 2017 in Savannah, Georgia.

Swing Central Jazz is a three-day workshop and competition with a “collective approach to big band jazz instruction,” according to Savannah Music Festival’s website.

White said the THS students, all juniors and seniors, went to UAB in October to record song submissions to be considered for the competition.

“Every group has to submit the same recording to somewhat even out the playing field,” White said. “Everyone was then given a teacher’s choice submission where you could really show off the student’s talent.”

White said it is fulfilling for him as a teacher to see the student’s hard work pay off, and be selected out of numerous submissions from schools across the country.

“It is incredible to see our students picked for their gifts and talents,” White said.

THS senior Leah Warman said it meant a lot to be selected to attend the competition in Savannah.

“I think it means a lot to everyone in the jazz band,” Warman said. “It is just really exciting for us as a whole. We all have worked really hard, and it was nice to see that our hard work paid off.”

Warman said leading up to the recording session at UAB, her and fellow students spent many hours practicing the pieces for submission.

“When you are in a band, you are working together for the same result,” Warman said. “We were all really wanting to do well, so it was exciting to hear we had been selected.”

Warman, who plays trombone, said she is looking forward to the opportunity to interact with other students from across the country at the competition in March.

“I think it will be really neat to get together with other students who share a common interest,” Warman said. “A lot of us want to do music for the rest of our lives, so it will be good to get to meet everyone.”

By EMILY REED / Special to the Reporter ALABASTER – For 10-year-old Alabaster resident Kaitlyn Weaver, the gift of giving... read more