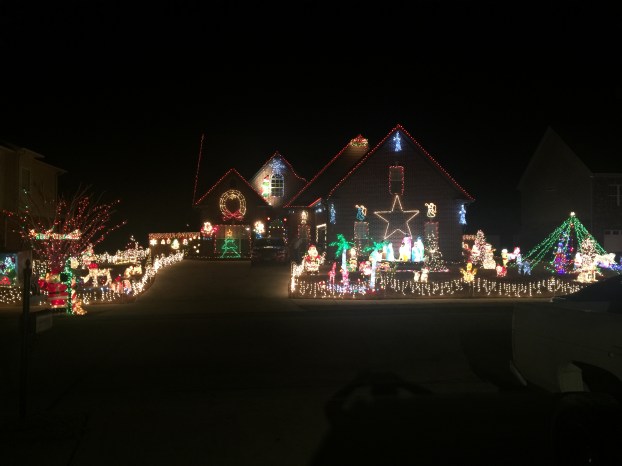 Kristie Landry is continuing a family tradition by displaying 50,000 Christmas lights on the front lawn of her home in Calera. (Contributed)

CALERA – This season, Calera resident Kristie Landry decided to continue a Christmas tradition that was started years ago by her parents, Pelham residents David and Barbara Phillips.

In September, the same month they moved into their new home, Landry and her husband began installing more electrical circuits to their breaker box to support the massive Christmas lights display that would soon follow.

A month later, she began hauling and setting up about 50,000 lights and Christmas-themed yard adornments to her home, located on Waterford Cove Trail in Calera. The lights were coming from her parents’ home in Pelham.

In 1999 her parents began adding lights to their usual display until they topped out at 70,000 lights in 2014. The collection consists of vintage decorations that feature bigger bulbs.

“Our lights aren’t synced to music or anything,” Landry said. “We like the older stuff over the newer stuff because it’s something you don’t see much anymore.”

Visiting the Phillips home had become a tradition for many Pelham residents, Landry said. Vehicles lined Red Fox Drive waiting to get a good look at the display. But the Phillips packed up their lights for good in 2014, deciding to no longer install the lights.

When Landry and her husband moved into their new home, they immediately thought that it would be the perfect house for the lights, which are visible from Alabama 70.

“Last year was the first year my parents didn’t have lights and all of the grandkids were missing the lights – it’s a part of Christmas for us,” she said. “We wanted to continue the tradition. My parents showed us how to do everything and they helped set it up. It took a little over a month.”

Landry said her home doesn’t have as many trees for hanging lights, which is why she wasn’t able to utilize all 70,000. It cost $200-$250 to install additional electrical circuits to her home, but she has yet to get her first power bill.

“There’s very few things that families can do together that won’t break the bank,” she said. “Just knowing that people are enjoying it makes it worth it.”

The Landrys get a few spectators in the evenings, but it hasn’t grown to the size of her parents’ yet.

“A lot of people don’t know about it yet,” she said. “My parents still get a lot of traffic from people who don’t realize that the lights have moved.”

From Staff Reports The University of Montevallo recognized 263 students for the completion of degrees on Dec. 9 at UM’s... read more