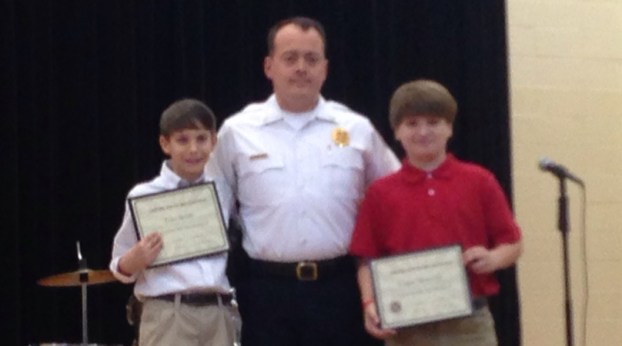 “We got a report of a fire in between two houses. There were actually two sheds that were involved. These two young men happened to be the guys that saw this. They knocked on the door of one of he homeowners to make sure they knew to get out of the home. They knocked on he next door, and got somebody to call 9-1-1,” Brantley said. “Their heroic acts likely saved two houses, and [the fire] was contained to the two sheds that were involved.”

According to Brantley, what Logan and Tyler did was relatively rare these days.

“Most adults like to take pictures of horrific things like fires and wrecks, rather than call 9-1-1. We have a problem with that. It’s more important to get help on the way,” Brantley said. “Rather than standing there and watching it or taking pictures, they knocked on the door of the house to make sure everybody was safe.”

The fire occurred at the home of J.W. and Glenda Short. The Shorts were out visiting a relative in Birmingham when they were notified of the fire.

“We were at UAB visiting our son-in-law. There wasn’t much we could do, because we were far away,” J.W. Short said.

According to Brantley, about $100,000 worth of property was lost with the sheds. However, Tyler and Logan managed to save two houses

During the talent show, both of the students received a certificate and a challenge coin. The Alabaster Fire Department awards challenge coins to those who have done heroic deeds.

“Our four core values are listed on that coin: accountability, commitment, excellence and integrity. We feel that those boys represented that. It’s something that they can put into their pockets, hold onto and remind themselves of how to live their lives,” Brantley said.

The Shorts expressed their gratitude for the students’ help.

“They’re very good kids in the community, but we didn’t expect them to do anything like this,” Glenda Short said.

Second graders at Meadow View Elementary School had the opportunity to swim for free between 6-7:30 p.m. on Thursday, Dec.... read more