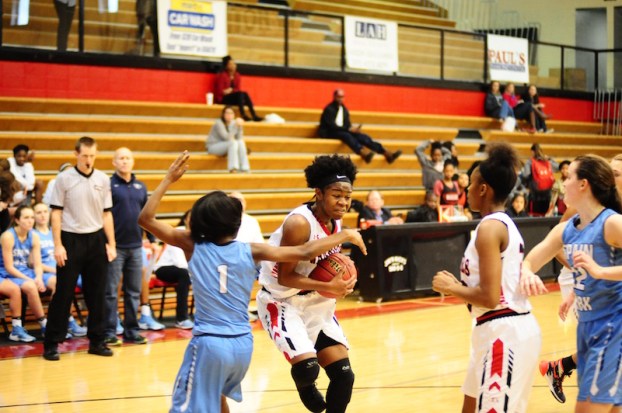 Kahyanne Bolton drives through traffic on her way to the basket for a layup. (Reporter photo/Alec Etheredge)

ALABASTER – Less than 24 hours after taking down Chelsea 59-26, No. 8 ranked Thompson was back at it taking on No. 4 Spain Park in a top 10 matchup amongst two of the best girls basketball teams in the 7A classification.

The Lady Warriors forced 39 turnovers in the Chelsea game on Dec. 16, and in similar fashion took advantage of several Spain Park turnovers to spurt several different runs and win by a final of 46-33. It was a 16-2 run in the fourth quarter that did the Jags in.

“I was proud of the way we kept our composure tonight,” Thompson head coach JoVanka Ward said. “Keeping our composure when teams make runs is something that has been very important to us and something I’ve preached to the girls.”

A hard-fought battle was the story of the rest of the game as each team went shot for shot with each other starting in the first quarter.

Thompson (8-4) started the game on a 7-0 run, but the Jags (6-4) answered right back with a 7-0 run of their own to even things back up. The teams traded a couple of more buckets in the quarter with the Warriors getting one more than Spain Park to take a 13-11 lead at the end of one.

Just like the Warriors did in the first quarter, the Jags went on a 7-0 run to start the second to snatch an 18-13 lead. Lauren Black hit a three for Thompson to trim the lead and then three Spain Park turnovers led to an additional four points for the Warriors as they answered right back with a 7-0 run just like the Jags did in the first. Spain Park went on a 5- 2 run the rest of the way to take a one-point 23-22 halftime lead.

“They’re a great shooting team and were setting several screens so we just had to understand that teams are going to make runs like that, but to be able to not get lost in the moment is what’s important,” Ward said.

The two teams traded runs again in the third quarter as Thompson started hot on an 8-2 run to jump up 30-25. The Jags made an early basket, but then went several minutes without scoring. Finally, an and one from Monique Speigner ended the drought and brought Spain Park to within three at 30-27. The Jags ended the quarter with an offensive rebound for a put back and a jumper, both from Christen Rushing, to take a 31-30 lead heading into the final quarter of play.

It might’ve been that they haven’t played in 10 days or they lost focus, but Spain Park, who was able to manage earlier Thompson runs in the game, was unable to handle the Lady Warriors in the fourth quarter. Several turnovers and the Jags missing several jumpers led to Thompson going on a 16-2 run in the fourth quarter to put away the No. 4 team with relative ease, 46-33.

“We tried to make some defensive adjustments because we didn’t want them to get comfortable,” Ward said. “We didn’t want to lose shooters because they are a great outside shooting team and I wanted the girls to be ready for that.”

Kahyanne Bolton led Thompson with 15 points in the contest. Brittany Grice also had a nice game in the post for the Warriors adding 11 points as she backed down the Spain Park defenders easily on several occasions.  Lauren Black and Niya Oden added seven apiece for Thompson.

Spain Park had seven different player score in the game, but none more than Claire Holt’s 10 points as she was the Jags only double digit scorer.

By ALEC ETHEREDGE | Sports Editor ALABASTER – The Thompson defense hounded Chelsea all night during the matchup between the... read more