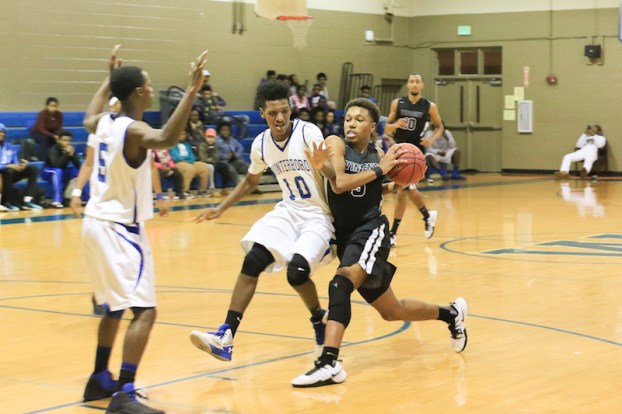 Stephen Campbell (5), pictured here driving to the basket, got into early foul trouble in the game, but rebounded for 14 points in the game. (For the Reporter/Dawn Harrison)

WINTERBORO – Vincent has been led by some tremendous performances from Stephen Campbell this year on their way to an 8-3 start, but what would happen if Campbell got in foul trouble or injured and they needed somebody else to step up? Well, the Yellow Jackets got their answer in a 62-41 rout of Winterboro on Thursday, Dec. 15.

Campbell has been the leading scorer for Vincent (9-3, 1-0) all year, scoring 20 points or more in almost every contest this season. Two early fouls within 2:30 of the game ended that streak as the Yellow Jackets were forced to play the majority of the first half with Campbell on the bench.

It wasn’t just Campbell, but the entire Vincent team that was struggling with foul trouble early as they averaged a foul per minute in the first six minutes of the game posting six team fouls with 2:37 left in the first quarter. The refs seemed to be calling a lot of blocks and charges, and the Yellow Jackets were clearly struggling to adjust as they trailed 11-9 after the first quarter of play with Campbell on the bench for the majority of it.

The second quarter started out very similar as Winterboro was in the double bonus with 4:34 left before halftime. The score at the time was 20-20 so things weren’t getting out of reach of the Yellow Jackets. They were able to maintain the fouls and not let the deficit get out of control by outscoring the Bulldogs 17-16 in the second quarter and only trail 27-26 at the break.

Coming out of the break it was clear Vincent head coach John Hadder made adjustments with his team in the locker room. The Yellow Jackets came out refurbished and looked like a different team. A burden had been lifted off of them as Campbell played the entire third quarter and the foul situation had switched teams as Winterboro had eight team fouls to Vincent’s two in the quarter. A 17-7 run by the Yellow Jackets was the result as Vincent stormed ahead by nine, 43-34, heading into the final quarter.

The fourth quarter was even more lopsided as Vincent went on to outscore the Bulldogs 19-7 in the frame, bringing their second half run to 26-14 making the game look a lot worse than it actually was. The final score of 62-41 made you forget about the Winterboro halftime lead. Vincent’s offense was just too much as they caught fire during the final three quarters scoring 53 of their 62 points during that stretch.

With Campbell sitting much of the first half, Chris Hardie stepped up to lead Vincent with a game-high 19 points. Campbell still added 14 and has now scored in double figures every game this season. Josef Greene also chipped in 12 points to give the Yellow Jackets three double-digit scorers for a team that has been using a lot more teamwork as of late.