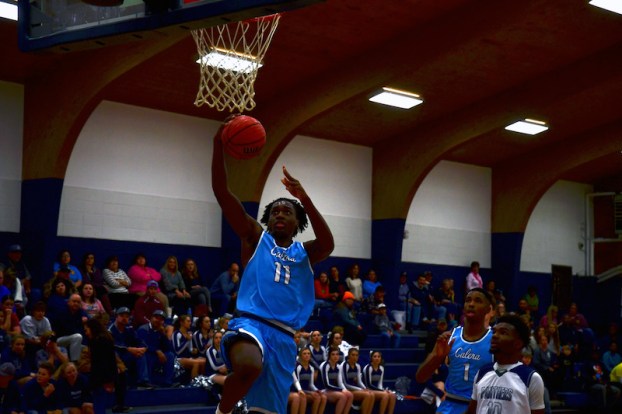 Yatil Gant led the way again for Calera with a double-double helping his team improve to 3-0 in area play on Friday, Dec. 16, by taking down a good Dallas County team. Calera has now won three in a row and five of their last six games. (File)

Calera moves to 3-0 in area play

CALERA – Yatil Gant posted a double-double and scored 21 points for the second consecutive game to pace the 11th-ranked Calera Eagles in a 74-61 win over No. 12 Dallas County on Friday, Dec. 16. The win completes a first half sweep in Class 5A, Area 6 play and puts Calera (8-4, 3-0) in the driver’s seat for its first area title since Coach George Drake took over the program in 2013.

“It’s a humbling spot for us. I say that because we work really hard here and we try to develop a team mantra,” Drake said. “I feel like our guys have really bought into what we’re trying to coach. Right now this group of guys is really starting to understand our role out there on the court and are doing a good job taking to it.”

CJ Smith opened the game scoring six points in the first quarter, helping the Eagles jump out to a 22-16 lead over the Hornets. The Eagles maintained their lead at the half, 40-33.

Dallas County’s Quincy Parker led all scorers at halftime with 14 points, but was held to a basket in both the third and fourth quarters to finish the night with 18.

Gant took over in the second half, scoring 14 of his 21 points to lead the Eagles. His eight points in the third quarter were joined by four from Smith and a 3-pointer by Kevin Dowdell to help Calera win the quarter, 16-12, and grow its lead, 56-46. Dallas County rallied in the fourth quarter to outscore Calera, 26-18, but it wasn’t enough to overcome the Eagles’ grip. Josh Benford scored 12 of his 15 points for Dallas County in the second half.

Gant’s 21 points and 12 rebounds gave him 42 points and 26 rebounds on the week, while Smith finished the night with 16 points and had 34 points in the Eagles’ two Area 6 wins over the week. Dowdell and Leo Lewis each scored nine for Calera. Jacob Smith also contributed to the team effort with a nine-rebound outing.

All 10 Eagles players that played scored at least one basket, helping to symbolize the team effort Drake says is Calera’s key.

“We have several guys on our team that impact the game in so many ways that don’t show in points,” Drake said. “Any given night you could have a different guy that leads our team in scoring … Our team has bought into stopping people on the defensive end and trying to score on what we do on defense.”

Drake says his team’s buying into the message of defense and rebounding was led by his seniors following their Thanksgiving Tournament. Since then, Calera is 5-1 in December and will carry a three-game win streak into Tuesday, Dec. 20, when it hosts Shelby County for a 7:30 tipoff.