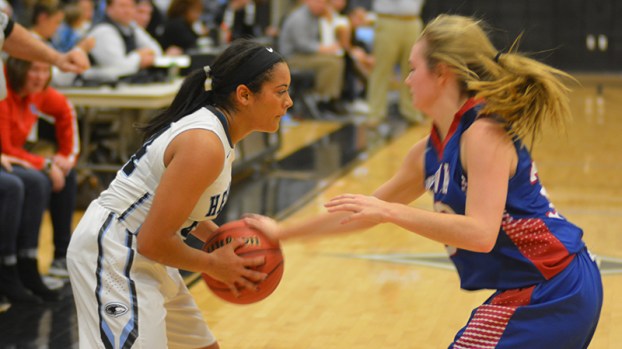 Helena’s Mekhi Mayfield looks to make a move in a game against Vestavia on Friday, Dec. 16. (Reporter Photo/Graham Brooks)

HELENA–The Helena Lady Huskies led Vestavia for three quarters but a sluggish fourth quarter sealed the win for Vestavia on the road 39-36 on Friday, Dec. 16.

Vestavia was looking for redemption after the Lady Rebels lost to Helena 34-24 on Nov. 17, and a 10-4 run in the final quarter helped give Vestavia the win.

It looked as though Vestavia was going to have a tough time grabbing a win on the road as Helena controlled the first 24 minutes of the game leading most of the way.

Jordan Jones led all scorers with 15 points for Helena with eight of those points coming in the third quarter.

Helena held a 32-29 lead going into the fourth quarter but a combination of good defense by Vestavia and a number of missed shots by the Lady Huskies helped give the Lady Rebels the lead they never gave up.

Helena did not score their first points of the fourth quarter until there were 32 seconds left in the game on a Mekhi Mayfield free throw.

A few seconds later, Helena’s Shakira Yuret drained a 3-pointer with 12 seconds left to cut Vestavia’s lead to 39-36 but that’s as close as Helena would get.