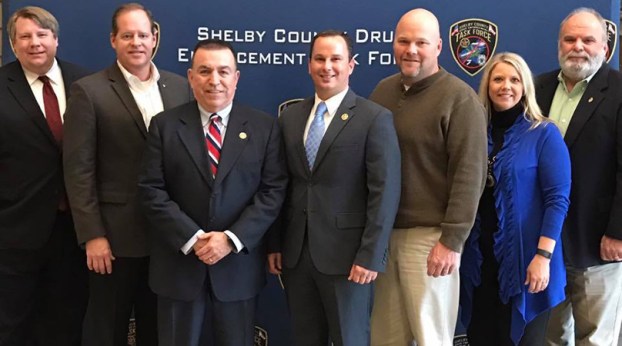 “According to the DEA, the number of fentanyl-related investigations [in the United States] has jumped from 624 in the year 2013 to well over 16,263 today,” Hammac said. “Fentanyl is new to the scene as a synthetic drug. It does have a legitimate purpose. It’s 100 times more potent than morphine. However, any opioid-based medication has the potential to be highly addictive, and that opens up the doors for abuse.”

Known as “China White” in some areas, fentanyl is an opioid that is commonly used as an anesthetic by those in the medical profession. However, it is illegal to possess without a prescription. Dealers have started mixing it with heroin, which has led to a spike in heroin overdoses in Shelby County from 2013-2016.

Hammac said two micrograms (the equivalent of about two grains of table salt) of fentanyl are lethal to humans.

“That is less than the size of Abraham Lincoln’s head on a penny,” Hammac said. “Our heroin dealers are not selling pure heroin to their clients. They are mixing in fentanyl with the heroin, which creates a larger product to sell. Some of their clients will say that the high is even better.”

According to Hammac, fentanyl is typically applied as a patch when used properly.

“We began seeing that these patches were being abused. [People] were removing the patches, scraping the gel from inside of the patches and smoking or ingesting the contents,” Hammac said.

However, dealers are now using the powdered form, “alpha-methyl” fentanyl.

“Now, we are seeing clandestine labs that are able to synthesize alpha-methyl fentanyl,” Hammac said.

Hammac said there is already a heroin epidemic in Shelby County, which is now made worse by the widespread inclusion of fentanyl.

“We have our heroin problem. But when you bring fentanyl into the picture, you get even more deadly overdoses,” Hammac said.

Officers in Shelby County have seized more than 108 grams of pure fentanyl and 80 grams of heroin 2016.

Hammac said officers run the risk of inhaling fentanyl if it becomes airborne.

“Handling fentanyl is not like going into a suspect’s house and confiscating kilos of cocaine. If a small minute amount of fentanyl is on a table, and we bump the table, those small particulates could go airborne and wipe out an entire room,” Hammac said.

Recently, Captain Tim Love of the Alabaster Fire Department instructed officers at the Drug Enforcement Task Force on how to properly administer Narcan, which is ingested nasally and counteracts the effects of fentanyl.

Hammac also met with Shelby County legislators to address the Task Force’s concerns about fentanyl. According to Hammac, there is currently no statute for trafficking fentanyl