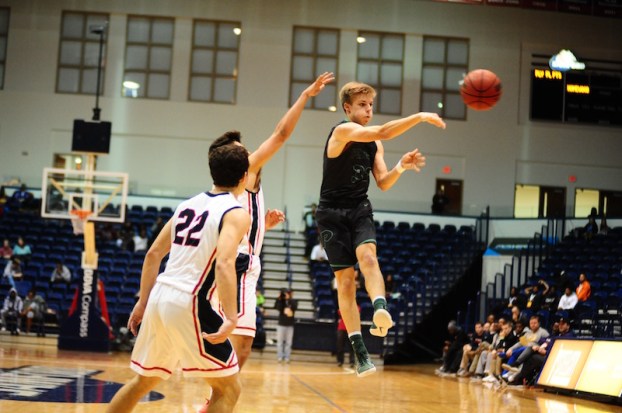 Pelham got its second win of the day after a come-from-behind 64-63 win over Homewood in the 2nd round of the Steel City Invitational. (Reporter photo/Alec Etheredge)

Pelham wins after trailing by 16 in 2nd half

BIRMINGHAM – No. 1 Pelham (11-1) picked up a huge win over Homewood in their second game of the tournament and day on Tuesday, Dec. 20, in the Steel City Invitational at the Pete Hanna Center on Samford’s campus. The Panthers trailed by as many as 16 in the second half before storming back to take the win and advance in the winner’s bracket.

Alex Reese and Justin Allison began right where they left off in Tuesday’s early game with Hale County as both came out and knocked down early shots in the first quarter. Reese hit an open jumper over the outstretched arm of a Patriots defender and Allison made a nice up and under driving layup through the lane to help propel Pelham to a 4-0 lead.

Homewood (7-4) got their first basket three minutes in on a 3-pointer, but Seth Torman of Pelham answered right back with a three of his own to put Pelham up 7-3.

The rest of the quarter went really slow as Pelham shot 4-12 from the field including 1-5 from behind the arc and Homewood turned the ball over six times. The Panthers led after one quarter at 13-10.

Allison came out and hit a quick jumper early to open scoring in the second quarter to put Pelham up 15-10, but Homewood answered with a 9-2 run to take its first lead of the game at 19-17.

Over the next few possessions Homewood continued that run eventually extending it to 16-4 and taking a 26-19 lead. Allison halted the run on the Panthers next possession as he answered with a three to cut the lead to 26-22. Each team scored a few more points during the last minute as Homewood took a 30-24 halftime lead.

Pelham continued the slow play into the third as they made one of their first seven field goals, which allowed Homewood, who hit four of its first six field goals to go on a 13-4 run and jump up 43-27. The Patriots were clearly hustling more and it paid off.

The Panthers went on a 9-2 run over the final few minutes of the third to trim the Homewood lead to 46-36 after three quarters of action.

Pelham extended the run into the final frame as they cut the lead to 46-39 making their run 13-2 overall. Homewood quickly answered with a three to go back up by 10.

The Panthers weren’t going away, however, as they stepped up on the defensive end and forced Homewood to mistakes. Pelham took advantage and went on another run, this time a 9-2 advantage. All of a sudden the lead was cut to just three at 51-48 with 3:50 left to play.

Bush continued the run by hitting a three to tie the game up at 51 apiece. Another turnover by Homewood on the next possession led to an easy transition basket for Allison to give the Panthers a 53-51 lead. Five Homewood turnovers in the quarter to Pelham’s zero had propelled the Panthers to a 14-2 run and the lead.

Homewood had one last chance and they capitalized as Touliatos hit a deep three to tie the game up at 54. Seth Torman missed a great wide-open look at the buzzer that fell short and led the game into overtime.

Touliatos hit another 3-pointer to open overtime and then came down one possession later and drove strong down the lane for a layup to put the Patriots up 59-54 quickly.

Reese answered with two free throws, and then made a jumper over a double team after a Homewood turnover to bring the Panthers within one at 59-58.

Blanchard and Reese traded free throws for their respective teams on the next two possessions to make the score 61-60.

In an exciting back-and-forth contest, Touliatos came down and made another strong drive to the rim for a floater off the glass, which was answered by a three from Alex Reese on the other end to tie things back up at 63.

Homewood tried to hold for the last possession, but Touliatos missed a jump shot and on the rebound, Jemison fouled with a push, which set up Alex Reese for two free throws. Reese made the first and missed the second, but grabbed the rebound off of his miss to run out the final 1.5 seconds and give Pelham the 64-63 come-from-behind win.

Reese led Pelham with his second double-double performance of the day, which included 25 points and the crucial late rebound to give him 10 rebounds. Allison added 18 points, five assists and two rebounds for the Panthers. Luke Touliatos had an incredible game for Homewood with 25 points and six rebounds to lead the Patriots.