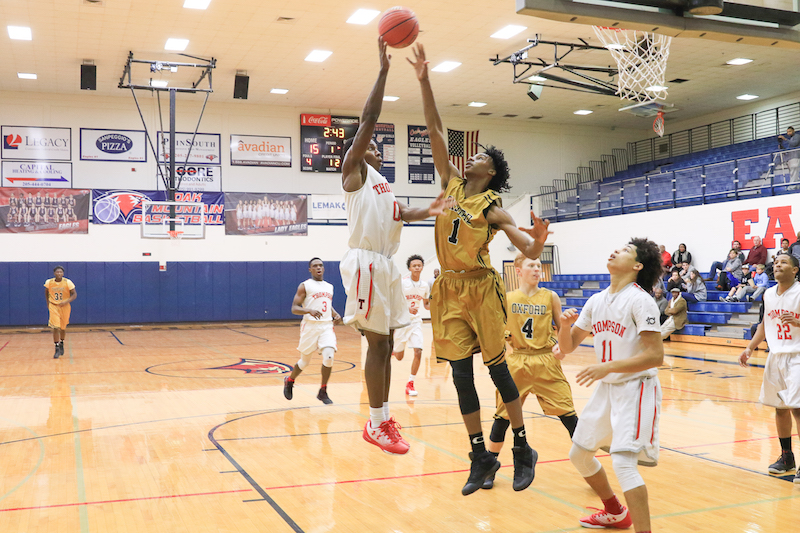 Drew Thomas (0) shoots over the Oxford defender for two of his 14 points in the Warriors win. (For the Reporter/Dawn Harrison)

NORTH SHELBY – The Thompson boys’ basketball team tipped off their first game of the Zaxby’s Invitational at Oak Mountain High School on Tuesday, Dec. 20, with a 70-68 last-second win.

The Warriors (4-9) used two free throws with .5 seconds left in the game to seal the win after a blocking foul was called on an Oxford defender.

Right from the tip, Thompson looked like the better team and it looked to be a long afternoon for the Yellow Jackets as the Warriors put up 26 first-quarter points to Oxford’s 11.

Thompson was able to use an aggressive full-court press to force turnovers and bad decisions by the Yellow Jackets. It also helped that three different players scored five points in the quarter and six total Warriors scored at least three points in a balanced effort that had given them a 15-point lead after one.

Oxford flipped the script in the second quarter as the offense woke up and scored 20 points, while holding Thompson to 17. The Yellow Jackets used 10 second-quarter points from Eugene Leonard to somewhat claw themselves back into the game and only trail by 12, 43-31, heading into the break.

In the second half, the Warriors continued to feel the pressure as they made bad passes and couldn’t come down with a rebound. The Yellow Jackets were able to score 20 more points, while holding Thompson to their lowest point total of the four quarters at 11 points. The Warriors only made three field goals in the third to Oxford’s seven. Thanks in large part to a strong first quarter, Thompson still held a 54-51 lead after three.

Continuing the strong play into the fourth, Oxford was able to take its first lead of the game and eventually leading by five before Oxford stormed back.

With just a few seconds left, and the game tied at 68, the Yellow Jackets were called for a blocking foul with .5 seconds left, which gave the Warriors two shots at the win. Thompson ended up knocking down both free throws to win a nail-biting thriller.

The Warriors were led by 14 points from both Victor Wilson and Drew Thomas. Tyger Quarles gave Thompson three double-figure scorers with his 11 points. In all, the Warriors had 11 players score in the contest. Oxford was led by Leonard who posted a game-high 23 points.