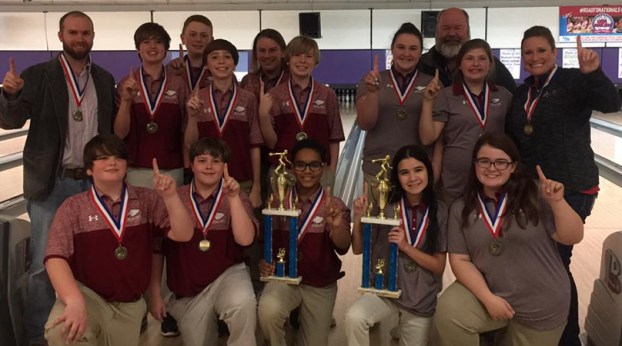 The TMS Girls’ and Boys’ Bowling Teams became Middle School Metro Champions for the second year in a row. (Contributed).

The Boys’ and Girls’ Thompson Middle School Bowling teams both became Middle School Metro Champions at the 2016 Metro South Championship on Dec. 9. The tournament was hosted by Pizitz Middle School at Vestavia Bowl. According to Thompson High School Varsity Bowling Coach Chris Hollingsworth, this is the second year in a row that both teams have won.

Both teams bowled in Baker games for all five rounds, meaning that one team member bowls for a single frame.

Hollingsworth said both teams went against PMS during the final round.

Both the boys’ and girls’ teams consist of seventh and eighth graders. Hollingsworth said none of the seventh graders had bowled as part of a league before joining the team.

“There aren’t a lot of kids from Alabaster who come to bowl. Most of them had never owned their own shoes or ball. At tryouts, I teach them to begin with, and I look at their coachability,” Hollingsworth said.

“We have Alyssa Keaton, who is the only one who had ever [previously] bowled in a league, who are already competing at the high school varsity level. She was the one who went last, and you typically have your strongest bowler go in the final frame,” Hollingsworth said.

From the boys’ team, Hollingsworth commended eighth grader Landon Masters, who is also bowling at the high school varsity level.

“He’s been really coming along. He’s left-handed, which is an advantage. The [boys’] team won when he, in the final Baker game, got his spare in the first shot and that sealed it,” Hollingsworth said.

Hollingsworth said he is proud of all the students on both teams.

“They bowled as a team, and never gave up. They had a positive attitude, which is very important, especially in baker games. They did a really good job of understanding that this is a team event and rooting for each other,” Hollingsworth said.

The following students are part of the THS Bowling Teams: