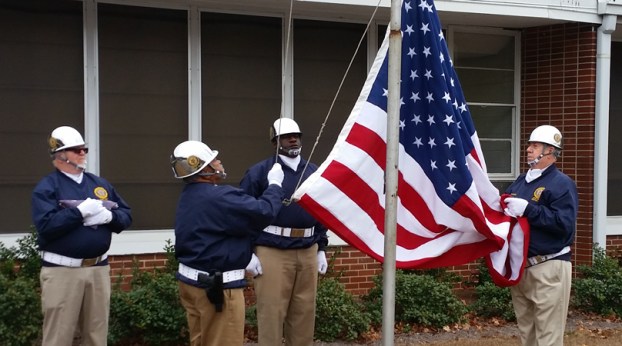 “We’re trying to tell residents thank you for flying the American flag, but we’re also trying to make sure the flags are serviceable,” Paschal said. “We used it as an opportunity to teach about patriotism in our community.”

While the program involved communities from across the country, Paschal said the replacement ceremony they performed was exclusive to their specific post.

“When we’re raising the [new] flag, we do bugle calls. Normally you would only experience this at a military base,” Paschal said.

During the ceremony, Post 555 members explained the proper protocols for retiring an American flag.

“We added a team of veterans who will go in and replace the flag,” Paschal said.

According to Paschal, the ceremony at SCISC is one of the largest he has ever seen in the area.

“About 30 or 35 people came out, despite the cold. They were really excited,” Paschal said. “What was so cool about this was that these weren’t American Legion members. These are teachers and staff members who were here while school was out.”

Paschal said every flag sold by the American Legion Flag Rewards Program is made in the United States and 10 percent of the proceeds from the flag sales benefit local programs to help families and children of military personnel.

“Each school has their own flag, so why not implement this program in schools? Patriotism isn’t in our bloodstream, it’s taught,” Paschal said.

Paschal urged all residents to attend the next flag retirement ceremony, which is scheduled to take place at the Shelby County Sheriff’s Office on Tuesday, Jan. 10, 2017, at 10 a.m.

Chelsea residents will have the opportunity to drop off their used Christmas trees to be recycled at the front of... read more