“The Helena Christmas Parade is always a crowd-pleasing event, and this year was no exception,” said City Council member Alice Lobell. “The floats and the performances were spectacular. It is such a joy to live in a city where the citizens support its activities and truly enjoy being together. The magic of Christmas shines in Helena!”

The first Helena Christmas Parade took place in 1970. It was a nighttime event, instigated by Methodist Pastor Holmes, according to Joy Childers. 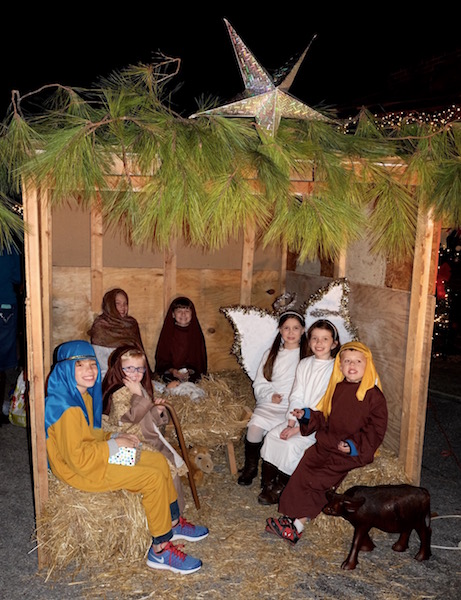 Here, the Wise Men and Shepherds are joined by Heavenly Host angels in the Manger Scene presented by Gospel Light Baptist Church at the December First Friday in Helena. (Contributed)

Rising to the challenge of the occasion, as in years past, was announcer Brian Peters.

The “sound guys” were Jack Gray and Tom Lefebvre.

Sydney Monica and Daisy Capps were the Elves.

This year’s theme saluted the Helena Fire Department, and there were several variations of “Stop, Drop and Roll” among the competing floats.

The First Place award this year went to the shared float of the 6th Grade Cheerleaders and Football Players.

In second place were the 4th Grade Cheerleaders and in third place, Kim Cato, Realtor.

The previous evening also brought out crowds to Old Town for First Friday.

Santa and his elves were at the Scozzaro Law Firm office and Mrs. Claus was regaling little ones with Christmas stories on their front porch.

The highlight of December First Friday (coordinated throughout 2016 by Kristi Scozzaro) many would agree, was the Manger Scene presented by Gospel Light Baptist Church.

Here, the Wise Men and Shepherds were joined by Heavenly Host angels.