Celebrating a rich and loving life

Kilpatrick, a current resident of Maplewood Ridge, says she was amazed at the efforts that manifested in the afternoon’s festivities. Many of her eight grandchildren and nine great-grandchildren were present as well. 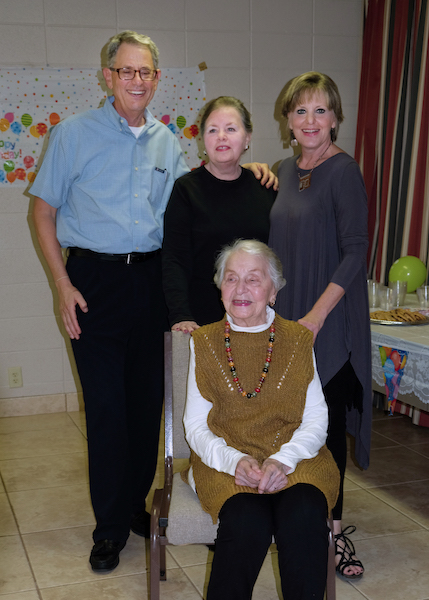 A celebratory mass with Father Ray Dunmeyer began the afternoon.

Son, Hugh Kilpatrick helped her blow out the candles on her cake as her two daughters, Camille Owens and Rosalie Oetting stood alongside.

“Is there one particular incident in your life that stands out above all the others?” I asked her afterwards.

“Getting married to my husband (Hugh Worthington Kilpatrick, who passed in 2002)—he was a flight instructor in the U.S. Army Air Corp and we were married on the Wichita Falls, Texas base on Feb. 27, 1943.”

Ms. Tina has two beautiful wedding announcements hanging in her room. One is a small hand-painted, hand-lettered painting on parchment paper that someone gave the couple as a gift. The other is a larger official Roman Catholic Certificate of Marriage.

At her birthday celebration, there were two albums containing photos and memories with her husband and children through the years

The cover photo on one shows a young and very glamourous tap-dancing beauty.

“In my teens, I tap-danced during intermission at the country club every weekend. My mother sewed all my costumes,” she recalled.

Ms. Tina grew up in Bessemer with two older sisters. She attended high school in Bessemer, but added, “I didn’t go to college because it was the Depression and my daddy said maybe he could afford to send me later.”

Ms. Tina was very active in her 60s—she played a lot of golf and today she still enjoys some of exercise workouts and is daily up and active with her walker.

Daughter Rosalie Oetting celebrates her mother saying, “She has lived her life to the fullest with a wonderful wit—always active, loving and gracious. She had a passion for entertaining, golf, bridge and her service organizations. She has been an inspiration, not only to me but to my children and grandchildren.

“She has taught us all that age is merely a number,” she continued. “She and my father had a wonderful marriage based on love, their faith and their respect for each other. I am so lucky to have her has my mom.”

By LAURA BROOKHART / Community Columnist “I love reading about the journey of artists and writers who at some point... read more