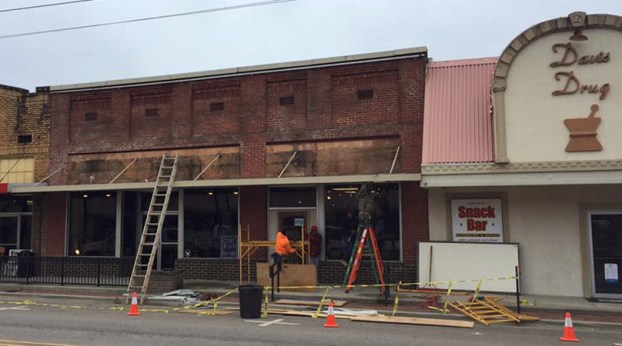 Davis Drug Company is the first of several older buildings in Columbiana that are being restored for historical accuracy. According to Columbiana Main Street Executive Director Bragan Feldman, the restorations are part of an initiative by the National Main Street Center.

“We’re getting back to the historically accurate and beautiful architecture,” Feldman said. “We’re taking it back to how [the buildings] were originally built. It’s going to be a complete revitalization of the historic downtown area.”

According to Davis Drug Company Owner Jim Davis, restorations on his business began on Monday, Dec. 19. The awnings and metal paneling has been removed. A new awning will be added, and stucco will be added to certain parts of the building.

Feldman said Columbiana Main Street originally believed that the bricks underneath the metal paneling had been damaged.

“We thought that they had put the metal up because the brick had started deteriorating, but when we removed the metal, the bricks were in good condition,” Feldman said.

“It looks like the metal salesman came through here, and everybody bought what he was selling,” Feldman said. “It was just the design style back during the 60’s and 70’s. They were trying to make it look like the new strip malls that were coming up and stay updated, when they were actually taking away what was unique about the buildings.”

Columbiana Main Street has reached out to other businesses in the downtown area, and is currently planning to restore several other buildings.

“It’s going to happen to more buildings in Columbiana, because they’re interested in redoing their buildings,” Feldman said. “Several of the buildings have received suggestions from the design team. They’re doing it in a step-by-step process, so it’s not one lump sum at a time.”

Davis said he and many other business owners in Columbiana have wanted to see changes in the downtown area for a while.

“Everybody in town, especially in the downtown area, wanted to get involved in updating to bring back the old, historical culture,” Davis said. “Part of it was redesigning some of the buildings.”