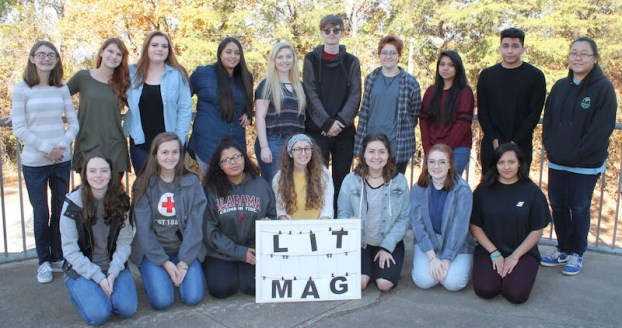 The 16-17 PHS Lit Mag staff is starting strong with a new YouTube channel and a focus on media and innovative design. (Contributed)

Looking for a way to create a unique ad for Literary Magazine’s student id drive, the class was brainstorming for a new advertising angle.

We found Keri’s ads on Youtube and watched a few. A fun discussion followed. The staff briefly discussed an ad staring me—which I quickly dismissed. Suddenly, that clarifying moment of epiphany that all teachers long for occurred.

“I have an idea. My dog Sofi is really cute and smart,” said PHS senior Kat Owens. “What if we used Sofi in our ad?”

Instantly, the collective creative spark of the class ignited and a commercial was underway. Sofi the spokes pup captured the hearts of the Lit Mag staff. Sofi is adorable—and a very convincing actress.

Every year, a literary magazine staff is as unique just as the magazine they engineer. The PHS Literary Magazine provides a venue for the artistry of our school. With the artists, writers, photographers, and their aesthetic always changing, the magazine’s complexion is new each year.

“Even though I’ve been on staff twice in the past, I never truly know what to expect,” said PHS junior Morgan Harris.

The commercial the staff created inspired a PHS Lit Mag YouTube channel. This staff is rich with writers, artists, photographers and filmmakers—a very media invested group. I asked students what they expected of Lit Mag.

“I expect a class of extraordinary bonds, a family of artists, writers, photographers and more. I expect great and unique design,” said new staffer Erin Riley.

By CONNIE NOLEN / Community Columnist “I have been at Pelham High School for over half my life,” said PHS... read more