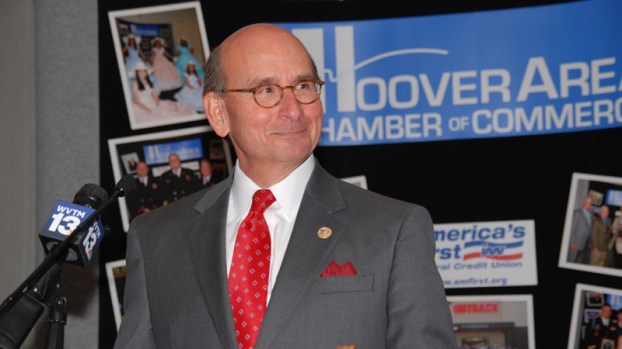 HOOVER – Mayor Frank Brocato may be the face of Hoover, but he knows it takes lots of help to run the city.

Brocato was the guest speaker on Thursday, Dec. 15 at the Hoover Area Chamber of Commerce luncheon and gave credit to many city employees.

Brocato began his presentation by saying the Hoover City Council is “great to work with” and then mentioned that there are more than 800 city employees.

“Every day they do things that are outstanding that you never see,” Brocato told a large audience gathered at the Hyatt Regency Birmingham – The Wynfrey Hotel.

Brocato said he thinks a quality education system is “the cornerstone of any great city” and thanked Hoover City Schools Superintendent Kathy Murphy for her work and leadership.

Also, Hoover High School football coach Josh Niblett was recognized for leading the Buccaneers to their most recent state championship.

Brocato recognized “unsung heroes,” such as Dan Fulton, who attends Hoover City Council and Hoover Board of Education meetings, records the meetings and then posts the recordings to social media.

The mayor touted Hoover’s $32 million reserve and AAA credit rating that was recently confirmed by Standard and Poor’s.

Brocato said he hopes to pass a budget some time in January and plans to hold budget hearings for the first time in several years.

Brocato also stressed the importance of the city’s public safety departments, assuring Derzis that the city is “100 percent behind” the police force and mentioning fire department efforts such as helping Santa Claus on an annual tour of the city.

“Without safe cities, nothing else seems to work,” he said.

Brocato mentioned the work of the Parks and Recreation and Engineering departments and said officials will work on a master plan that will include biking and walking opportunities.

“We want to be able to bike and walk Hoover,” he said.

Sports is an important part of the Hoover economy, including the Southeastern Conference Baseball Tournament, the Regions golf tournament returning to Greystone and the construction of the Finley Sports and Events Center.

“It’s going to be a great sports facility, and we think it’s going to bring in people from all over the country,” Brocato said.

“We want to be a little more thoughtful about how we develop our city,” he said.

Brocato said his election platform included “taking down the doors in the city hall” and said there has been an “unending” number of people coming in to talk about issues.

“Our office is open,” Brocato said. “”We are anxious to make our city open to everyone.”