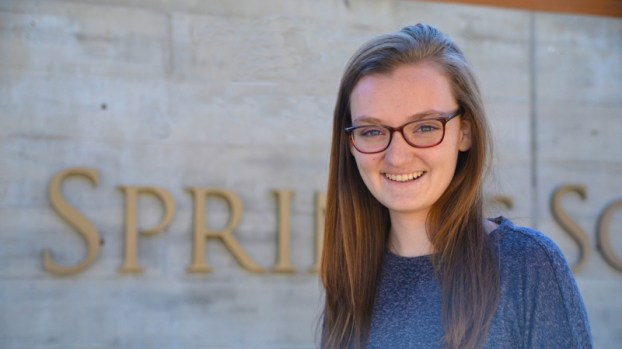 By Mindy Keyes Black/For the Reporter

INDIAN SPRINGS – Indian Springs School senior Emma Turner has been selected as one of two students to represent the state of Alabama as a delegate to the United States Senate Youth Program from March 4-11, 2017, in Washington, D.C.

Founded in 1962 through Senate resolution, the USSYP each year selects two high-achieving students from each state, the District of Columbia, and the Department of Defense Education system overseas through a competitive, merit-based selection process that includes a personal interview, essay and test on U.S. history and government.

Transportation, hotel and meals will be provided by The Hearst Foundations. Each delegate will also be awarded a $10,000 college scholarship for undergraduate studies, with encouragement to pursue coursework in history and political science.

“I am incredibly honored to represent the state of Alabama,” Turner said. “Politics and public service are often seen negatively, especially in our current political climate. I am so excited to spend the week with a group of future leaders who see public service as a way to help people and better our country. By participating in USSYP, I will be able to bring back what I learn to help change Alabama for the better.”

During Washington Week, Turner and fellow delegates will hear major policy addresses by senators, Cabinet members, officials of the Departments of State and Defense and directors of federal agencies. They will also participate in a meeting with a U.S. Supreme Court Justice and the President of the United States. The sessions with elected officials will include question-and-answer periods.

“Emma is a truly extraordinary young woman, and we know she will represent the youth of this state brilliantly,” said Sharon Howell, Head of School of Indian Springs School. “She understands that to make a difference in the world, we must participate actively in it—through community service, meaningful discourse and engaged citizenship.”

Currently the national programs director for High School Democrats of America, Turner planned and implemented the national voter registration drive, planned the HSDA National Summit in Washington, D.C., and represented HSDA at the Democratic National Convention last summer. She also served as state chair for Alabama High School Democrats in 2015-16. In that role, she increased the number of chapters in Alabama and planned an issue advocacy event for sex education laws for the Alabama Legislature.

She is a member of YouthServe’s Youth Philanthropy Council and a member of the Indian Springs School student-run Judiciary. She plans to major in political science and economics and hopes to work in Washington and later return to Birmingham to pursue a political career.

Named by Business Insider in 2016 one of the smartest boarding schools in the nation, Indian Springs School is a national leader in coed boarding and day education for grades 8-12. Inspired by the motto “Learning through Living,” the school seeks to develop in students a love of learning, a sense of integrity and moral courage, and an ethic of participatory citizenship.

By Emily Reed / For the Reporter  HOOVER – Greystone Elementary School art teacher Blue Horn believes everyone has a... read more