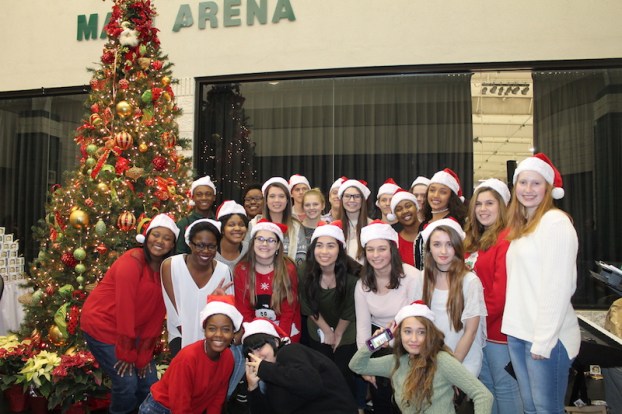 PHS choir students happy to be at the city of Pelham's Christmas Open House. (Contributed)

“This is our last year to have a child sing in the choir,” said Cindy Bonham. “I’m glad that the high school choir is performing. Some of the younger kids are singing with them later.”

Bonham’s son Daniel is a PHS senior. Having a senior of my own, my daughter’s lifelong classmates and their families feel like extended family. Pelham’s Christmas kick-off has been at the Pelham Civic Complex every Christmas that this senior class has been alive. This year, due to the main ice skating arena repairs, the city tweaked their traditional tree lighting event.

“Of course, we wish we could have our celebration on ice,” said Danny Tate of the Pelham Civic Complex. “We’re glad to host this Open House instead and we’ve worked hard to make it festive. We’ll be glad when our main arena construction is complete.”

As a PHS teacher, I suspected students might forego Pelham’s Open House. PHS choir, culinary and Pelham Police Explorer participants attended; however, many school groups could not be featured due to space limitations.

Surprisingly, students filled Pelham Civic Complex on the Monday after Thanksgiving. My own senior daughter proposed that we meet there as she came by between afterschool practice and an evening lesson. Sampling her annual Christmas cookies, she watched me take photos of students and former students.

Vacillating between the main lobby, Santa in the ballroom and the kids’ free skate in the practice arena, I regretted missing the message—that Christmas truth that Brother Mike Shaw or another area minister shares annually—a story reflecting on the season.

“I miss watching all of the kids,” Johnson said. When the choir began caroling, Johnson smiled. The kids were performing after all.

In retrospect I realize that, just as the kids were present, the message was present also. Community and tradition are Pelham’s message. We gathered and supported one another; we celebrated together; and putting aside our own agendas, we put children first. That’s the best Christmas message of all. Merry Christmas friends.