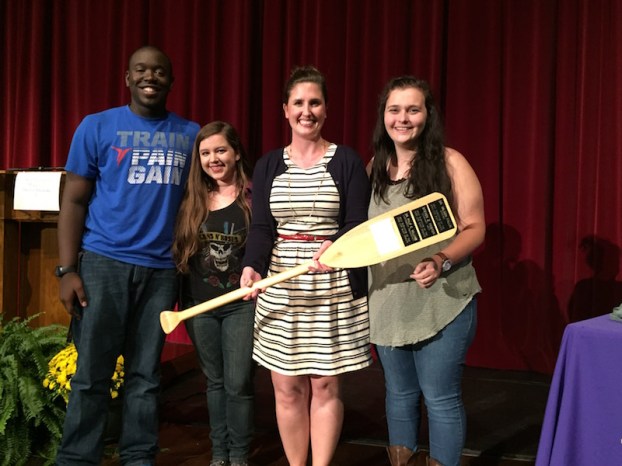 Dr. Andrea Eckelman standing with some of her Women in Politics students after the debate with her trophy, an oar. (Contributed)

The Life Raft Debate, one of the many unique traditions at the University of Montevallo, came again this year at 7 p.m. on Oct. 13.

The concept of this debate is that most of humanity has been destroyed by a nuclear war, and a group of professors debate on which discipline is best to rebuild a new civilization.

First, each professor gives an introductory of themselves and their discipline, and then they are given a chance to rebut their opponents.

Finally, the audience votes on the professor and discipline that will help them survive this new society.

Dr. Andrea Eckelman, a first-year Political Science assistant professor at UM, is the successor of the 19th annual Life Raft Debate. About 600 votes were cast in person and on Twitter, and she prevailed.

Eckelman said she prepared for the debate “simply by thinking about what it was that interested me about political science.”

“I thought about classes I had taken in undergrad that interested me, and what I tell undergrads now to help get them interested,” she said. “And, when I really thought about it, I realized that political science actually encompasses parts of other fields, which seemed like a good thing to highlight in a competition.”

She then explained her appeal to a primarily student audience.

“Also, as soon as I heard about the premise, I knew that if I ever did participate, I would somehow work in my obsession with all things Walking Dead,” she said. “I love that show so much, and I know it had to come up somehow. And, I figured that after talking up political science, I would need to talk myself up since so few students know me right now. That’s how I got the idea for the slideshow that I used.”

As preparation for the 20th annual Life Raft Debate is now underway, Eckelman is excited for next year to defend her title.

By SABRINA ZIZO / Community Columnist The Office of Service Learning and Community Engagement Department at the University of Montevallo... read more