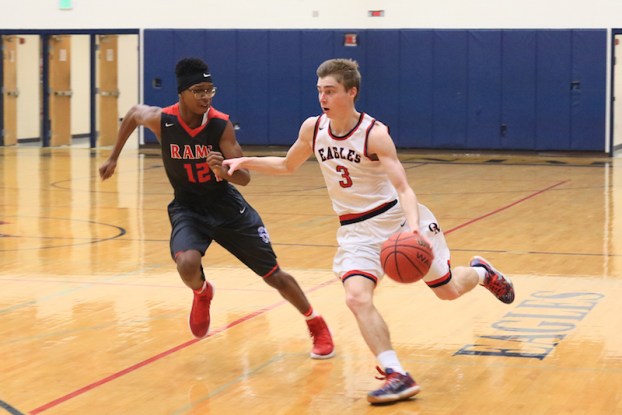 Will Stephenson posted 47 points over three games to lead the Eagles to the Zaxby’s Invitational Championship. (For the Reporter/Dawn Harrison)

Eagles take down No. 10 Grissom in Zaxby’s Championship

NORTH SHELBY – The Zaxby’s Invitational host Oak Mountain Eagles took down Carver and Scottsboro in consecutive days to find themselves in the championship game against the No. 10 Grissom Tigers on Thursday, Dec. 22.

While the offense has looked good lately, it was the defense that stepped up in this one and won the game for the Eagles as they made a late defensive stand and blocked a shot to win a close 44-41 game.

“Both teams played really hard and well defensively, and I’m really proud we were able to do it on that end of the floor because we always preach that offense comes and goes, but defense is always there,” Oak Mountain head coach Chris Love said. “Easy shots were hard to come by, but we’ve won five in a row now and are growing to where we need to be as a team.”

Early on it was the Will Stephenson show as the senior from Oak Mountain (12-5) came out and dropped three 3-pointers in the first quarter for nine points. Stephenson scored their first six points and assisted or scored on 11 of the Eagles 14 points in the quarter. The defense matched the offense’s intensity early on as they limited the Tigers to just five first-quarter points.

In the second quarter both teams showed no offense whatsoever as they combined to make just four field goals, only one of which came from Grissom. Both teams scored eight in the quarter as Oak Mountain held steady with their nine-point lead going into the half up 22-13.

Grissom’s defense was tough and physical throughout the game as they extended it past the 3-point line and got away with several hand checks, which frustrated and affected the Eagles in the third quarter. The Tigers held Oak Mountain to just two made field goals and seven points in the frame, while they, on the other hand, got 15 combined points from two seniors in KyShawn Scarborough and Jordaan Rambus on their way to 19 total points in the quarter.

Grissom had all of a sudden stormed in front with the 19-7 run and stole a 32-29 lead as they headed to the final quarter.

“Coach (Jamie) Lee does a great job and in the third quarter they hurt us with some things,” Love said.

In between the third and fourth quarter, you could hear Love talking to his team about intensity and picking up the pace on the defensive end after giving up 19 points. He then proceeded to draw up a play to start the fourth, which Oak Mountain executed perfectly. Chris Mayweather caught the ball at the top of key and proceeded to lob it over the top of the defense to Josh Pierce in the post who laid the ball in and drew the fall, which brought obvious excitement and emotion to Pierce.

After the made free throw Oak Mountain had already tied the game up and showed their intensity level had changed. They started the quarter on a 7-0 run and grabbed the lead back quickly at 36-32. The Tigers battled back with a couple of big baskets and after an and-one had tied the game at 38 with just a couple of minutes left.

Oak Mountain went to the line with just a minute left to play up 40-38 and missed both free throws, but Chris Mayweather got a huge offensive board and put back to put the Eagles up by four with less than a minute to play.

Grissom got another and-one on their next possession to get back within one and on the ensuing in-bounds pass, Oak Mountain tried a length of the court pass over the full-court press, which resulted in a turnover and a bad foul directly after, which put the Tigers on the line with a chance to tie and take the lead. They missed the front end of the one-and-one and Will Stephenson grabbed the ball and was immediately fouled for the Eagels.

In a quarter where nobody wanted to knock down free throws, Stephenson, the most spot on shooter for Oak Mountain, missed both from the charity stripe. The Eagles still held a 42-41 lead with 22 seconds left and needed a defensive stand, which is just what they got. Grissom brought the ball up the court and tried to draw a foul on a shot at the top of the key, but Mayweather kept his hands straight up and blocked the shot without jumping to seal the game. The Eagles knocked down two more free throws with a couple of seconds on the clock to win 44-41.

Stephenson was the only double-digit scorer for Oak Mountain with 17 points and was named tournament MVP. Pierce added eight points and was a member of the All-Tournament team along with Mayweather.