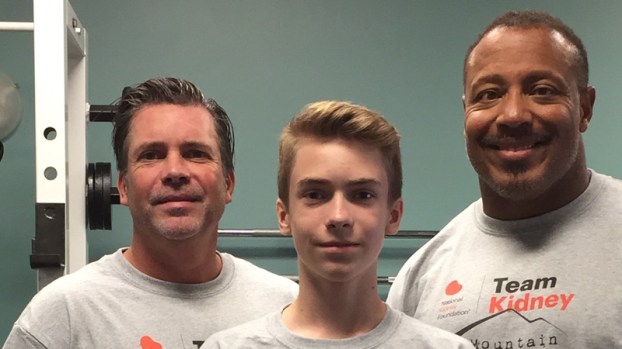 Bob Kuykendall, left; his son, Cade; and Greg Hasberry, right, are preparing to hike Mount Kilimanjaro in June 2017. Kuykendall donated one of his kidneys to Hasberry in April 2015, and the two plan to use their climb to bring awareness to organ donation. (CONTRIBUTED)

Editor’s note: See the bottom of the story for an update about the trip.

NORTH SHELBY – Few people can say their friend donated a kidney, and a year later make plans to hike Mount Kilimanjaro, but for Bob Kuykendall and Greg Hasberry, it is all part of their story.

“Greg and I knew each other in passing, but we weren’t great friends,” Kuykendall said. “I knew he was having some health issues, but I didn’t know the extent of what he was going through. He contacted me in April about a computer-related question. I could have probably just taken care of it over the phone, but something compelled me to meet up with him for coffee.”

When the two met for coffee, Kuykendall, who lives off U.S. 280, was dealing with several life issues and admits he was in a cynical place.

“I had been praying a lot and thinking about life in general,” Kuykendall said. “I was sort of having a mid-life crisis. I was in good physical shape but having problems with my faith, and Greg was a man of good faith, but having physical issues. When we met for coffee I noticed his arms were in bad shape from all of the dialysis he was having. He shared with me he thought his brother was going to be a donor, but he wasn’t a match.”

After some discussions with his wife, a chance encounter with a business owner in Auburn, and prayerful consideration, Kuykendall decided to see if he would be a match for Hasberry, who lives in Hoover.

“I went to UAB to be tested to see if I was a match,” Kuykendall said. “They told me it was not likely we would be a match, but they tested anyway. I told them I thought I would be a match just because of how everything had played out. After the tests, they called me three days later and told me I was an 80-percent match. Everybody was a little shocked. I called Greg and told him I was a match, and he cried like a baby.”

In May 2015, Kuykendall and Hasberry underwent surgeries for the kidney donation, and have since used their experience to reach others in education about organ donation.

“We want to inspire others who may be going through issues, whether physical, emotional or spiritual in nature,” Kuykendall said. “We have found that people are too busy with daily obstacles. We know a guy who said ‘I am just climbing, man.’ We realized that we are all climbing, and then we had the idea to create our own obstacle to climb while we try to reach others climbing their own ‘mountain’ so we decided to climb a literal mountain.”

In June 2017, Kuykendall and Hasberry, along with Kuykendall’s 14-year-old son, Cade, will travel to Africa and climb Mount Kilimanjaro.

“Mount Kilimanjaro is the world’s tallest freestanding mountain,” Kuykendall said. “We thought this would be a good way to get people’s attention in trying to raise awareness for organ donation. We wanted to be able to show people that we also have mountains to climb, and we are willing to climb an actual mountain to share that message.”

Several local businesses have agreed to sponsor the friends as they prepare for their journey, and a website has been created for anyone who would like to follow the group’s story.

“I plan to update while we are on the actual hike so people can follow along,” Kuykendall said.

While there are no physical limitations for both Kuykendall or Hasberry with the recent kidney transplant, Kuykendall said Hasberry will have to modify a few drugs for his overseas vaccines and Kuykendall has been advised to stay adequately hydrated.

“We feel like our story is unusual and we would have never planned things to go the way they did, but we are so thankful we now have this platform to share with others,” Kuykendall said.

For more information about the trip or to donate, visit GoTeamKidney.org and then search “mountain” in the team space.

The team is interested in talking with anyone who wants to be part of the trip, which will be an eight-day trek departing from Atlanta on May 31.

The cost of $5,147 includes air fare, three nights lodging, all transfers, all meals, all tips, a shopping/sightseeing excursion to Moshi and a visit to a local orphanage.

Anyone interested should text “kili” to 413-0600 or visit TeamMountain.org.

COLUMBIANA – A Chelsea man charged with murder was released from the Shelby County Jail on Monday, Dec. 19, on... read more