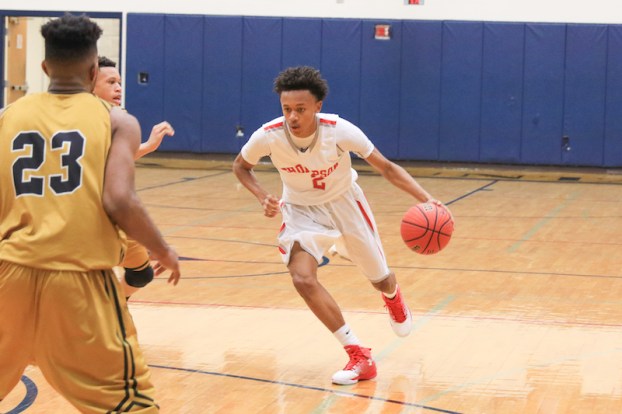 Jaylin Wilson put up 32 of Thompson’s 64 points in their loss to Scottosboro in the third place game of the Zaxby’s Invitational. (For the Reporter/Dawn Harrison)

NORTH SHELBY – Despite Jaylin Wilson dropping 32 points, Thompson (4-11) fell to Scottsboro 69-64 in overtime in the third place game of the Zaxby’s Invitational at Oak Mountain High School on Thursday, Dec. 22.

Wilson came out on fire knocking down four 3-pointers and another jumper for 14 of the Warriors 19 first-quarter points. Wilson almost scored as many as the entire Scottsboro team in the quarter as they only put up 15 points.

The senior’s strong play continued into the second quarter as he put up 10 of Thompson’s 12 points in the quarter to bring his first-half total to 24. Seven different players scored for the Wildcats in the second, however, which gave them 14 points and brought them within three as the Warriors took a 31-29 lead into the half.

It was obvious the Scottsboro coach didn’t want Wilson touching the ball or getting any good looks in the second half. He was heard talking to his players during timeouts on several occasions about stopping number two. His players listened as Wilson only put up one point off of a free throw in the third quarter. Thompson was held to 12 points, while the Wildcats went on an offensive explosion putting up 21 points behind 12 from Desmond Blair. All of a sudden Scottsboro had stormed in front 50-43 with one quarter to play.

The Wildcats maintained around a seven-point lead throughout the fourth, but with just a few minutes left to play Thomspon went on a quick 13-4 run to close out the game and tie the score at 60 apiece and send it to overtime.

In the overtime period, Scottsboro used four different scorers to go on a 9-4 run and seal the third place victory in the tournament by a final score of 69-64.

It was an up and down game and tournament for Thompson, but they competed with some tough teams and are getting better as the year moves along.

Wilson led all scorers with his 32 points and was one of three double-digit scorers for the Warriors as Jalen Bustamante had 13 and Nehemiah Womack had 12. The Wildcats were led by 19 from Blair and 12 from Bo Nix and Seth Ingleright.