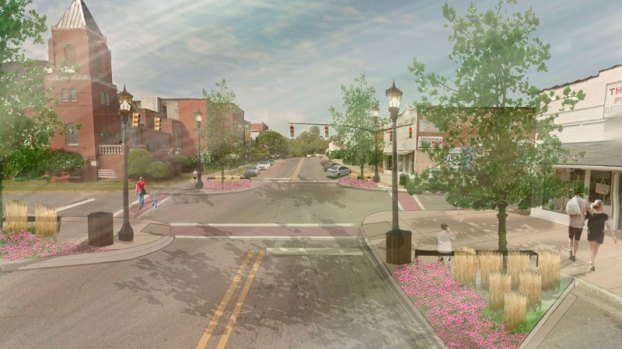 A sketch of the planned improvements to Main Street in Montevallo. (Contributed)

The Downtown Montevallo Streetscape Project will break ground on Jan. 2, 2017. The project consists of three roadway projects administered through the Alabama Department of Transportation.

The projects have been in the works for more than a decade, according to the city’s website, and their initiation falls in the city’s bicentennial year.

The projects will bring nearly $5 million of improvements to Montevallo’s infrastructure and aesthetics. According to the city’s website, underground utilities will be replaced, overhead power lines will be minimized, traffic signals will be updated and the downtown area will be more compliant with the Americans with Disabilities Act.

Steve Gilbert, executive director of the Montevallo Chamber of Commerce, said the beginning of the project is a historic moment for the city.

“It’s the fact that we’re going to change the appearance of our downtown and we’re investing in our community,” Gilbert said. “It shows the commitment of the city and its people to our community.”

Gilbert said the improvements to the sidewalks are much needed and he believes the change will get more people out around town.

“Once we’re done with construction, I think it will get people out of their cars, onto the sidewalks and into our stores,” Gilbert said. “Curb appeal will go up, and that’s always a good thing when people feel more welcome.”

Gilbert said the improvements speak to the business community that the city is invested in the development of its businesses, and hopes the city will see continued economic growth with the completion of the project.

The estimated time to complete the project is about 200 working days, according to Gilbert.

The city expressed gratitude on its website to former mayors Sharon Anderson and Ben McCrory, Shelby County manager Alex Dudchok and Shelby County chief engineer Trey Gauntt for their efforts in bringing this project to fruition.