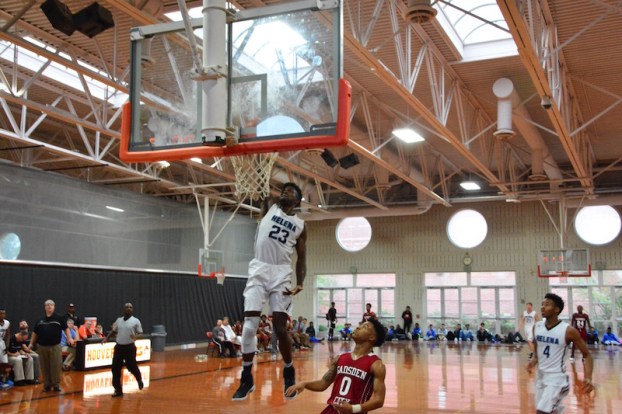 Helena’s Jon Brown slams down a dunk for two of his team-high 18 points in the game. (Reporter photo/Alec Etheredge)

HOOVER – The Helena Huskies basketball team was on a roll having won seven straight games coming into their first round matchup of the Big Orange Classic with a good Gadsden City team. Two of Helena’s three losses coming into the matchup were to the state’s best team in Mountain Brook and their other loss to Vestavia, they have since avenged.

The Huskies fought hard the entire game, but in the end, Gadsden City’s full-court press was too much for Helena to handle in a sloppy game of turnovers by each side. Helena’s win streak was snapped at seven as they went on to lose 59-47.

In the first quarter, Gadsden City took advantage of forcing turnovers and doubled up the amount of made field goals Helena had making eight to the Huskies four. Every Huskie offensive possession seemed to work in favor of the titans as their hands were very active tipping passes and sprinting up the floor on fast break. The defensive effort had given them a 21-10 advantage after the first quarter.

Helena realized they needed to step it up and match Gadsden City’s defensive effort if they wanted any chance of winning the game and that’s just what the Huskies did in the second quarter. They were able to hold the Titans to just three made field goals and six points. The Helena offense, however, still struggled to find any breathing room and only scored eight points on two made field goals as Gadsden City took a 27-18 advantage into the half.

Helena head coach Chris Laatsch knew his team needed to have a more complete effort from both ends of the floor in the third quarter if they wanted to scratch their way back into the game. The problem for Helena was maintaining a run. They went on several runs in the third quarter to cut the lead to as close as six, but every time they inched closer they allowed an offensive rebound and put back or they turned the ball over to cease the run.

Jon Brown, Helena’s leading scorer, tried everything he could in the quarter to will his team back posting 10 third-quarter points. The Huskies ended the quarter with a huge dunk from Brown and followed that with a 3-pointer from Richard Fitts to cut the Titans’ lead to six points at 41-35. Helena could have gotten even closer if it weren’t for Deonte Jones adding nine points for Gadsden City to somewhat even out Brown’s impressive quarter.

In-between the quarter change you could hear Laatsch tell his guys to attack the defense and rim. That’s exactly what both teams did in the fourth quarter as they came out trading blows inside the paint in the quarter. Gadsden City was able to maintain around a 10-point lead the majority of the quarter, but after a few forced turnovers from the Huskies, they climbed back within six with a couple of minutes to play. After forcing another turnover, they get the ball back and had the opportunity to get within four or three, but an offensive foul by brown gave it right back. The Titans took advantage and ended the final minute of the game on an 8-2 run to win 59-47.

Brown led Helena with 18 points in the game and was the only Helena player in double figures. Justin Stuckey knocked down three 3-pointers for nine points and was the Huskies second leading scorer.

Jones led the Titans with 23 points, while Jalen Cole added 15 points and Jayln Brewster contributed 10 to give Gadsden City three scorers in double-figures.

Helena plays again tonight at 6:30 in the losers bracket.