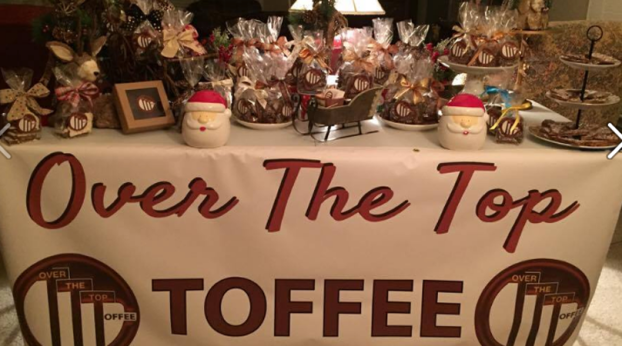 Woolf was originally inspired to start her business by an old family toffee recipe.

“We’ve had it in the family for over 60 years, but I tried it very late,” Woolf said. “This really is something that I have wanted to do for years, ever since I had tasted it.”

Woolf said she had been planning to start her business for a while, but never seemed to be able to find the time.

“The problem is that I worked in corporate America and I was extremely busy. Life’s happenings always seemed to get in the way. I almost nixed it,” Woolf said.

Woolf said it took a conversation with a stranger to convince her to put her ideas into action.

“There had been interest, so I decided that I better drop what I’m doing and try and prepare myself to start this business,” Woolf said.

Because Over The Top Toffee received its food license so close to the holiday season, Woolf said she is currently developing her business while selling the toffee.

“I have a makeshift website. With social media, I’ve kind of sat on the curb for a while so I could make sales and try to get the word out,” Woolf said.

Woolf was surprised to see how popular her toffee has become in only a short period of time.

“I haven’t been able to make [the toffee] fast enough. It’s surpassed anything I could have imagined during this past month. There are many nights that I was up until four in the morning. I have been swamped.” Woolf said.

According to Woolf, a lot of hard work is involved in making and packaging the toffee.

“I manufacture it all. I stand at the stove and stir every single batch. I pour it out into a three-pound slab. From there, it needs to set up, and that usually takes about seven or eight hours. From there, I break it up, and package it. It’s totally made from love,” Woolf said.

Over The Top Toffee’s most popular flavor is Southern pecan. The white chocolate macadamia is a close second. Other flavors include: peppermint passion with dark chocolate and peanut butter swirl.

Woolf said Over The Top Toffee is currently run from home, but she is planning to receive her commercial license and searching the area for a store location.

To place an order with Over The Top Toffee, visit their Facebook page or their website: www.Overthetoptoffee.com.