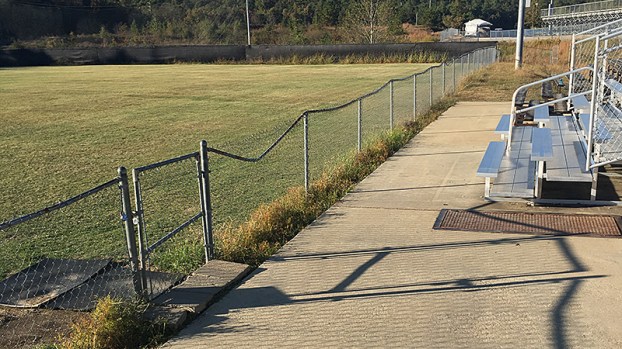 The fence on the soccer fields is a project included in the program’s renovations. (Contributed)

CHELSEA – Members of the Chelsea High School soccer program kicked off a fundraiser Dec. 6 to raise money for much needed renovations at the school’s facilities.

“We have had a list of things to do to improve the program for several years,” said Lee Miller, head coach of the Chelsea boy’s soccer team. “Over the years we have just compiled different things we would like to renovate or fix, and we have chipped away at various projects.”

Miller, and girl’s soccer team head coach Jonathan Hammett decided the building at the school used for the soccer team could use some repairs.

“Several years ago the school built a building that serves as a place for the soccer team,” Miller said. “It is an empty shell of a room. It could use some new paint, has rusty chairs and not enough for all of the players to sit down. We were thrilled to have the building to use, but one of the parents from the soccer team came to us and said what if we put lockers in the building and completely renovated it. That is where the idea came to fix it up.”

“We were kind of overwhelmed once people started hearing that we were trying to do these upgrades,” Miller said. “Sherwin Williams donated paint to paint the walls, and one of the parents volunteered to do all of the work. Once we started seeing people step up to help, we started adding to the list of repairs that we would like to see done within the program.”

Some of the other projects include replacing a rusted fence in front of the bleachers, and upgrading the field goals to competition style.

“Our soccer goals are super heavy,” Miller said. “Ideally, we would like to be able to replace them because right now they are hard to move, and we need to get some competition goals in place.”

Miller said the program was also in need of a flag pole, and the city of Chelsea agreed to donate a flag pole.

“It is amazing how you have this idea and you think about the cost and wonder how you are going to have enough to pay for things, and then people start donating and giving things and everything becomes a reality,” Miller said. “We are hopeful now we can do all of the projects we would like to see accomplished.”

Both teams created videos to encourage individuals to donate toward the fundraiser, and have a website set up for anyone wishing to donate.

“We have a great program, with some great kids,” Miller said. “The way we look at this is it is just a way to make the program that much stronger. Instead of doing all of the projects over a period of the next three or four years, we thought we could hold fundraiser and try to get them all done at once. We are excited to see so many people interested in giving.”

For more information about the fundraiser, or to contribute, visit https://app.snap-raise.com/fundraisers/14010/participant/583163?share_type=email&donation_invite_id=6454295.

By EMILY REED / Special to the Reporter ALABASTER – Alabaster restaurant owner Will Cholewinski has a simple goal for... read more